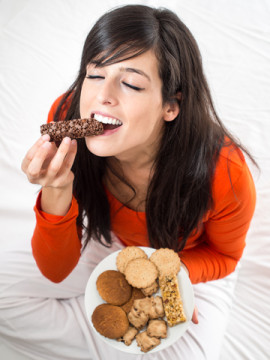 Have you ever wanted dark chocolate so much that you didn’t catch a single word during that meeting just salivating over the thought of it?

Or a burger so desperately that you were willing to drive an hour just to make sure you got it?

Have you ever left everything you were doing, and at the most inconvenient time, and during the worst weather conditions, to get to a coffee shop no matter how far, just to get a cup of coffee?

If so, then you are probably familiar with food cravings.

When a food craving hits, it knows no mercy.

In a matter of seconds, the thought of a cupcake or bag of chips can go from “A cupcake sounds good” to “I must have a cupcake or I’ll explode!”

And, unfortunately, we usually crave easily accessible, processed, calorie-dense foods that can pack on pounds.

Calories consumed during a craving binge can amount to 1,000 to 2,000 if you’re not careful, And while you won’t pack on the pounds if you indulge a craving every now and then, you may start to gain weight if you don’t get those cravings under control.

Use these tips to help rein in those pesky cravings.

It’s true: cravings often just get worse when you try to ignore them. So, it’s often better to go ahead and indulge your cravings, but in a healthy way.

Don’t be afraid to give in — just a little, it may keep you from splurging even more later.

Take a close look at your cravings, and you’ll probably see a pattern. I suggest making a “Most Wanted” list of the foods you most often crave and overindulge in. Then, create a special stash of healthier options that can calm the beast.

Follow this advice and you’ll be better prepared the next time a craving hits. By having a plan, you’ll be more likely to stay on a better eating track and maintain a healthy weight. Most cravings are actually signals from our bodies that we are dehydrated, but we misinterpret them as hunger pangs. By some estimates, 80 percent of people are chronically dehydrated. So before you reach for food to nix your cravings, quench them with some water. Then wait half an hour. More often than not, they’ll be gone.