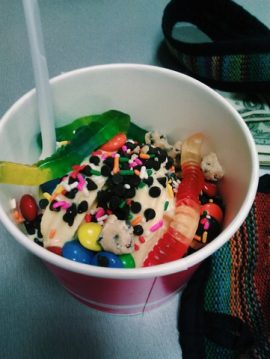 You may feel virtuous ordering a creamy white swirl of frozen yogurt from any one of the “real” yogurt shops popping up across the country—frozen yogurt has become a 2 billion dollar industry, but what are you really getting? Does fro-yo offer all the same health benefits as regular yogurt? Is this seemingly guilt-free pleasure truly low-fat? And what about all those toppings? Discover the truth about these tempting frozen snacks as I shine the light on the top four misconceptions about frozen yogurt.

Tip: For a variety of flavor and texture, add a few different fruits. One ounce of fruit is about 15 calories and 0.1g fat—and gives your frozen snack an added boost of vitamins and nutrients. Just make sure fruit is fresh, not in a sugary (and caloric) syrup.

Myth 2: I Can Eat as Much Frozen Yogurt as I Want since It’s Low in Calories:

Partially true. While most frozen yogurt is nonfat or very low in fat the calories still add up. Most nonfat “original” or “plain” (typically the lowest-calorie flavor at most frozen yogurt shops) is about 30-35 calories per ounce with about 20g of sugar—meaning that a large 16-ounce cup weighs in at 380 calories and 76g of sugar before adding any toppings.

Tip: If you’re going to spoon down one of these delicious frozen snacks, stick with the small for about 150 calories.

Myth 3: Frozen Yogurt Is Healthy and Makes a Good Lunch:

Frozen yogurt is a healthy treat, but it shouldn’t be a meal replacement. You need to have a balanced meal that contains healthy carbohydrates, healthy fats, and proteins. In the same way you wouldn’t drink a glass of orange juice and consider it a breakfast, you shouldn’t be using frozen yogurt as a meal either.

TIP: Try to create lunches that have a balanced nutritional profile. For example, a piece of lean chicken, some vegetables, a yogurt and a glass of milk. Not only are you looking for your carbohydrates, fats, and proteins, but you are also looking for foods that are high in various vitamins and minerals to help your body function at top performance.

Myth 4: All Frozen Yogurt Is Healthy:

They are not all treated equally. There are a wide variation of calories, sugars, and fats among many different frozen yogurts. For example, you could eat anything from a fat-free to something that’s extremely high in fat (similar to ice cream).

Before you indulge in a frozen snack, think about what you’re getting. Lots of people order the large (16 oz) cup at their favorite frozen yogurt shop and think they’ve made a healthy choice. Throw on sliced banana and a sprinkling of shredded coconut and you’re looking at 530 calories. That’s more than an entire pint of Ben & Jerry’s vanilla frozen yogurt (520 calories). If you’re looking for quantity and all the goodies along with it, you’re better off splitting a pint of Ben & Jerry’s chocolate fudge brownie frozen yogurt with a friend. It will set you each back 320 calories and 5g fat, many fewer calories than a large fro yo—and way less money too!

Physical Education = Strong Bodies, Strong BrainsBeat the Heat Before It Beats You