8 Herbs and Spices That Have Health Benefits 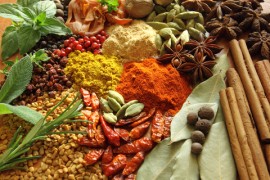 8 Herbs and Spices That Have Health Benefits

Chances are you sprinkle cinnamon into your morning oatmeal or add a dash of oregano to pizza without giving the spices much thought. But did you know your favorite herbs and spices can actually do your body good? While spices are only effective when eaten at least daily, each has its own specific health benefits. Technically, spices are vegetables in concentrated form. Like veggies, they contain thousands of healthy phytonutrient compounds, including antioxidants. And they are calorie-free and require no prep. Pop the tops on these eight pronto.

Most people have cinnamon around the house, but usually it’s been there for a few years! Cinnamon has the highest antioxidant value of any spice. It has been shown to reduce inflammation and lower blood sugar and blood triglyceride levels. Cinnamon has also been used to alleviate nausea and to increase sensitivity to insulin and aid in fat burning. It provides manganese, iron and calcium. It’s antimicrobial properties can help extend the life of foods.

While cinnamon is an incredibly healthy and nutritious spice, it is often hard to branch out from the most common uses of cinnamon: cookies, muffins and desserts. Other places in the world, cinnamon is used in savory and sweet dishes, everything from breakfast to dessert.

Turmeric is often found in kitchens around the world, but is not commonly used in the U.S. It is a common ingredient in Indian foods, and a great addition to soups. It contains Curcumin, a cancer-fighting compound. It is more often taken medicinally in America for its ability to reduce inflammation and improve joints. For a spark of flavor, add to egg dishes, soups, meat dishes, sauces and baked foods.

The second most used herb in the world after black pepper, cumin provides a distinct and pleasant taste. It is most often used in the U.S. in Mexican or Spanish dishes and in seasonings for tacos or chili. I recommend just buying in bulk and using with chili powder to season these dishes. This will provide better flavor and save money. Plus, have you ever read the ingredients in those little seasoning packages? Hello MSG! Cumin has antimicrobial properties and has been used to reduce flatulence. It is a wonderful addition to curry powder or to flavor Mexican or Middle Eastern dishes.

Cayenne has many health benefits and can improve the absorption of other nutrients in foods. It has been shown to increase circulation and reduce the risk of heart problems. Though available in capsule form, it is also a great addition to many foods. In small amounts, it can be added to practically any dish, meat, vegetable or sauce. As tolerance to the spicy flavor increases, the amount added can be increased also.

Another spice mix that is not commonly used in the U.S. but you might have tasted it in Thai dishes. It can have a wide variety of ingredients, but often contains turmeric, coriander, cumin, cinnamon, mustard powder, cayenne, ginger, garlic, nutmeg, fenugreek and a wide variety of peppers. With all these ingredients it has an amazing range of beneficial properties. Curry is an acquired taste, but can be added to meats, stir fry’s, soups and stews.

Most households have garlic around in some form or another. Fresh cloves are always best, but powdered, minced and granulated forms provide excellent flavor. This is another one that goes into everything from eggs, to tuna salad, to baked fish for dinner. Studies show that just 2 fresh cloves a week provide anti-cancer benefits.

Dill has antibacterial properties but is most known for its stomach settling ability (ever wonder why pregnant women crave pickles?). It contains a variety of nutrients but loses most when heated to high temperatures. For this reason, it is best used in uncooked recipes or in foods cooked at low temperatures. It is a great addition to any type of fish, to dips and dressings, to omelets or to poultry dishes.

I add basil to practically everything I make, from eggs to vegetables to soups. Basil has anti-inflammatory and antiviral properties and can help prevent osteoarthritis. It has been used in digestive disorders and is being studied for its anti-cancer properties. Though commonly used in Italian cooking, Basil is a versatile herb that can be added to practically anything. Fresh is always best, but dried is ok too as long as it is freshly dried. Basil can be sprinkled in omelets, on baked or grilled veggies, in soups, on meats or sliced fresh into salads. Layered with tomato and mozzarella cheese, it makes a wonderful Caprese Salad.

There are many other beneficial cooking herbs and spices and I hope to cover them all at some point. I encourage you to branch out from salt & pepper and try all the wonderful culinary combinations that can be made with these herbs and spices.

Let me know what your favorite herbs and spices are below!

Exercise and Asthma5 Signs You’re Too Obsessed With Your Weight