Bicep Tendonitis of the Shoulder 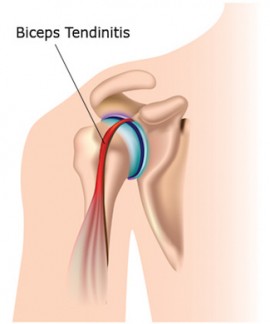 Bicep Tendonitis of the Shoulder

Causes: Injuries to the bicep tendons are often caused by repetitive overhead activity. Overuse, aging, and stress can cause the tendon to deteriorate, even if there is no inflammation present.

Management: The first step is to rest the arm and shoulder by temporarily discontinuing any overhead-activity. A physician may recommend ice applications and non-steroidal anti-inflammatory medications, such as ibuprofen, which can help reduce inflammation. Stretching and progressive strengthening exercises will help strengthen muscle and restore range-of-motion. Overhead activity can be resumed gradually. (American Academy of Orthopedic Surgeons)

Reality CheckJust Tell Me What To Do (Part 2)

2 thoughts on “Bicep Tendonitis of the Shoulder”