Vertex Fitness | Can You Get the Same Results without a Personal Trainer?
InstagramLinkedinYouTubeGoogle+TwitterFacebook

Can You Get the Same Results without a Personal Trainer? 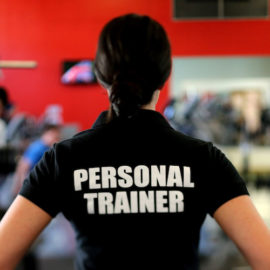 Can You Get the Same Results without a Personal Trainer?

In the world of fitness and exercise, science has the answers, not marketing teams. A studio like ours will tell you that working with a qualified personal trainer is your best bet for getting and staying fit and healthy. The guy selling in-home gym machinery on late night infomercials will promise rock hard abs with minutes of unsupervised exercise in your own rec room. Who’s right?

A Study on Exercise Results With and Without a Personal Trainer

A team of six researchers recently published a study in 2017 titled “The Effects of 6 Months of Progressive High Effort Resistance Training Methods upon Strength, Body Composition, Function, and Wellbeing of Elderly Adults“. The purpose of the study was to look at the fitness markers of older adults after six months of supervised high effort resistance training, like the type of strength training we practice here at Vertex Fitness. After six months of working with a trainer, they measured their overall wellbeing using markers like strength, body composition, and function. As expected, they had improved across the board after six months of working with a trainer. At this point, they gave the participants a choice: they could keep exercising on their own, or they could stop. After six months of either unsupervised work or nothing, they took another look at their fitness markers. What they found was telling.

It turns out that their strength, body composition, function, and wellbeing of the participants didn’t change much whether they had chosen to work out on their own, or do nothing. While they retained at least some of the benefit of the six months of supervised strength training, the folks who had spent six months working out unsupervised didn’t have much new to show for it.

Why Didn’t They Get Results without a Personal Trainer?

The answer to this is somewhat speculative, but researchers have a pretty good idea of what they think happened. As it was worded in the study, “comparisons over the follow-up between those who did and those who did not continue with RT revealed no significant differences for changes in any outcome measure.” So, essentially, the folks who had worked hard with a six-month intervention of supervised resistance training had basically the same outcome whether they kept working out alone or sat on their butts.

According to the study, “Over the follow-up, body composition changes reverted to baseline values, strength was reduced though it remained significantly higher than baseline, and wellbeing outcomes were mostly maintained.” So, their bodies went back to the way they were before training, they kept some of the strength they gained during the supervised training, and they were definitively better off for having spent the time with their trainers working hard. But why didn’t the people who kept working on it by themselves end up better off?

The Benefit of Working with a Trainer is Not Purely Motivational

The answer most likely lies in reduced effort. Effective strength training, like the kind practiced at Vertex Fitness, requires you to constantly increase the level of resistance that your body faces in order to improve your strength and level of fitness. If you don’t give your body a challenge that it can’t quite meet, it will not adapt to meet it. That’s the basis of strength training: your body’s natural ability to adapt to increased stress and stimuli by rebuilding your muscles to be bigger and stronger. If you don’t keep your body supplied with constant overload, it won’t adapt–you’ll either stay where you are, or lose ground over time.

The simple fact is that very few people are capable of supplying themselves with enough resistance (in a safe way!) to affect change. Even personal trainers work with other trainers for their workouts when they can (see the Vertex Fitness blog post “A Personal Trainer Who Uses A Personal Trainer – Client Spotlight, Tricia Roarty”). It’s natural to want to stop when you feel the discomfort of muscle fatigue, and most people cannot effectively gauge their own limits. They take it easy on themselves, even when they feel like they’re working hard. This is most likely what happened with the study participants who saw no real results working on their own, but were only able to maintain some of what they originally had. Even while struggling and sweating, they likely hit the point of perceived muscle fatigue and stopped without giving their muscles the true overload that they need to grow stronger. It’s easy to do–especially when it’s so easy to hurt yourself by pushing hard with less then proper form. A personal trainer is able to recognize the line between too easy and unsafe, and can guide clients to the place of muscle fatigue with little risk of injury.

This is the real benefit of working with a personal trainer. It’s not about pep talks or motivation, it’s about recognizing the strength trainer’s limits without pushing too far into the realm of injury. A qualified personal trainer will be able to help you achieve results and keep building on them in a safe, effective way. Much better then the results without a Personal Trainer.

4 thoughts on “Can You Get the Same Results without a Personal Trainer?”