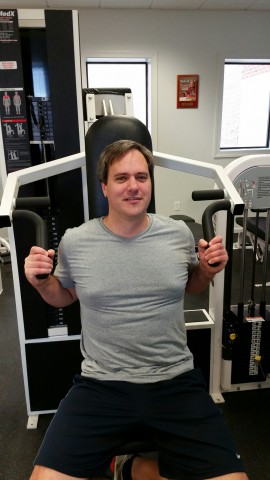 Todd J. is a busy guy. He is a husband, father, and small-business owner and is very active in his community. As it happens to many of us, Todd started to neglect himself as little. He was determined to get in better shape and be healthier.

Approximately one year ago, Todd met Dwayne at a local networking event. He found Dwayne to be both knowledgeable and friendly, so when Dwayne offered him a complimentary session at Vertex, Todd readily accepted.

Todd averages two workouts per week. He feels stronger (because he is) and more fit to play sports. In fact, he took up the sport of Paddle Tennis and is rising up his club’s standings. He is more active with his kids. Todd even reports that he has been in an overall better mood.

Being a busy guy, Todd really appreciates that his workouts are very focused and intense. He gets in and out of the studio in less than 45 minutes. He never has a problem finding a little time in his schedule to make an appointment that keeps him moving in a positive direction!