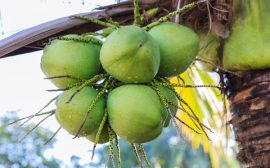 Coconut water has become the thirst quencher du jour. Low in calories, naturally fat- and cholesterol free, more potassium than four bananas, and super hydrating – these are just a few of the many benefits ascribed to America’s latest health craze: coconut water.

It’s now a permanent fixture in the coolers of convenience stores and natural food stores, alongside traditional sports drinks, flavored waters, and Perrier. It fills the fridges of hot-yoga studios. So as the sweaty summer training months are upon us, it’s no surprise that people are asking, “should I be drinking coconut water?”

Before I answer, let me explain some basics.

Coconut water is the liquid derived from the fluid inside the coconut. It’s not to be confused with the coconut milk in the dairy aisle (alongside soy, rice, and almond milk), which is a mixture of coconut water and fresh-grated coconut. And it should definitely not be confused with cream of coconut, which is one of the main ingredients in your favorite beachside cocktail.

Coconut-based products have gotten a lot of media attention recently because of purported health and weight loss benefits. Coconut oil, which is extracted from the meat of the coconut, has been hailed as a weight-loss agent in large part because of its unique fat content. While it contains mainly saturated fat, it is also a source of harder-to-find medium-chain triglycerides, and these medium-chain triglycerides (MCTs) are absorbed differently than other common dietary fats and used for fuel more quickly than the long-chain triglycerides (LCTs) found in meats and dairy products. But there just isn’t enough solid scientific data to back up the weight-loss-coconut connection, and all that saturated fat can wreak havoc on cholesterol levels and potentially overall health.

That said, coconut water does offer some benefits. It’s a natural way to replenish electrolytes after hard workouts. Unsweetened varieties are free of the sugar, artificial sweeteners, or dyes contained in many conventional sports drinks. And it’s high in potassium and magnesium, two nutrients the body needs for general health and good performance.

However, compared to conventional sports drinks, coconut water is lower in two of the main ingredients your spent system needs after a tough workout: sodium, the main electrolyte you lose through sweat, and carbohydrates, which help restock the body’s spent energy stores. That being said, coconut water is an excellent source of potassium (430 milligrams per 8-ounce serving), and many of us don’t take in anywhere near the recommended daily amount of 4700 milligrams.

Staying hydrated is one of the most important things for recreational and professional athletes. And if the taste of coconut water helps you drink plenty of fluids, it is a fine choice for most people but may not be for those in prolonged physical activity.

Coconut water is low in carbohydrates and sodium and rich in potassium, which is not exactly what athletes need when exercising rigorously. Whether you choose a sports drink, coconut water, or plain water, they all work to keep your body hydrated. The challenge is when you exercise strenuously for more than three hours in the heat and lose lots of body fluids, you need easily absorbed carbs for quick energy and to replace lost electrolytes like sodium and potassium. Neither coconut water nor sports drinks contain enough sodium or carbs for the heavy perspirer. Supplement with a quick source of energy like a banana or some raisins and a handful of pretzels to provide nutrients to replenish your stores.

So if you’re looking for electrolytes to rehydrate after a long run, a speed session, or just a tough workout in hot weather, a traditional sports drink is still going to be the best bet to rehydrate and replenish your energy. If you’re looking to cut calories and keep your fluids au natural, coconut water is a fine choice. Just be sure to reach for unsweetened varieties!

Remember: If you’re just going for a short run of 60 minutes or less, good old-fashioned water is a perfectly fine way to hydrate. Sip fluids throughout the day so you’re well-hydrated heading into the run.

There are some health benefits to consuming coconut water. It’s an all-natural way to hydrate, reduce sodium, and add potassium to diets. Most Americans don’t get enough potassium in their diets because they don’t eat enough fruits, vegetables, or dairy, so coconut water can help fill in the nutritional gaps.

Beyond that, the scientific literature does not support the hype that it will help with a laundry list of diseases. There is a lot of hype about coconut water, yet the research is just not there to support many of the claims and much more research is needed.