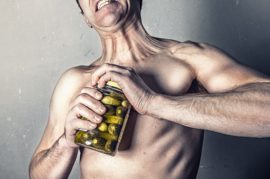 Exercise modality (ie, whether you are performing “aerobic” or “high intensity” exercise) has long been considered the only important factor in building muscle and getting all of the benefits out of exercise. We’ve covered this topic several times, while discussing cardio exercise and the difference between cardio and strength training. In that post, we covered how exercise commonly understood to be “cardio” can actually have the same cardiovascular benefits as strength training exercise, as long as the strength training is performed with sufficient intensity.

To dive deeper into this topic, we’re going to take a look at the research paper “Questioning the Resistance/Aerobic Training Dichotomy: A commentary on physiological adaptations determined by effort rather than exercise modality“. This paper appeared in the Journal of Human Kinetics volume 44 in 2014. This paper states that “In presenting the evidence herein we suggest that lay persons wishing to attain the health and fitness (including strength and muscle hypertrophy) benefits of exercise can choose from a wide range of potential exercise modalities so long as the effort is high.” Essentially, as long as the intensity of the exercise is sufficient, it does not as much matter which exercise modality you choose, as you will still receive all the benefits of the exercise.

This paper shows that momentary muscular failure is the key to getting all of the benefits out of any exercise modality. It’s not so much about how you work, it’s about how hard you work. As the paper says, “the relationship between physiological adaptations from resistance exercise or aerobic exercise when both are performed to maximal effort appears closer than has historically been portrayed. The evidence suggests that when effort is maximal or near maximal, similar physiological adaptations promoting aerobic/cardiorespiratory fitness AND hypertrophy, along with the aforementioned health measures, are likely irrespective of the exercise modality. And more, that effort appears to be the single most significant controllable variable to determine physiological adaptations to exercise.”

To get more from your workout, contact us at Vertex Fitness to get in touch with a trainer who will set you up with a strength training regimen.

Ladies Night Out with Vertex Fitness: Presenting on “First Do No Harm”Perfect Form – Suburban Life Article about The Vertex Fitness Difference

One thought on “Effort or Exercise Modality: What Matters More?”