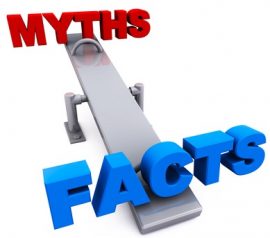 Exercise Myths and Facts are very prevalent in a young industry like fitness. There has been plenty of time for myths and misconceptions about exercise to develop over the past few decades. Originally strength training was avoided by many athletes and coaches. In fact, there were many college football and basketball coaches who would threaten to kick their players off the team if they were found strength training! Sounds strange, right? In the 1960’s and 1970’s, strength training was believed to cause athletes to get “Muscle Bound” they’d slow down in their performance, and lose flexibility. With further research, this eventually was proved false. Strength training actually increased speed and muscle strength, improving athletic performance. Flexibility isn’t lost so long as you use the full range of motion. Here are a few other exercise myths that developed over the years:

How your body responds to any type of exercise, including strength training, varies by individual depending on their genetic potential. Muscle size does not directly relate to muscle strength, you can be strong without putting on a lot of muscle mass. Building strength isn’t only beneficial to women, it’s essential.

“You have to do cardio separate from strength training”

Many people put off starting to exercise because they feel they don’t think they can devote enough time to get any results. But if you remember that exercise is a stimulus, you’ll understand that the only thing the body needs is most stimulus than it’s previously been used to. While exercising 2-3 times a week would be optimal, once a week is better than not exercising at all. You’ll still be able to gain results, simply focus more on the quality of your workouts rather than the amount of time spent doing it.