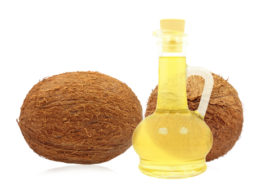 Coconut oil is the latest miracle food. If you believe popular wellness websites, it’s good for just about everything – from making your teeth whiter, skin more luminous and hair shinier to boosting your brain and bone health and treatment for yeast infections. However, according to the Food and Drug Administration, coconut oil isn’t all it’s cracked up to be.

Coconut oil’s health benefits are often credited to the medium-chain triglycerides it provides. However, coconut oil actually contains very little – about 10 to 15 percent of all of its fat is the beneficial short-chain MCTs that contain no more than 10 carbon molecules. While the major saturated fat in coconut oil is lauric acid (a 12-carbon molecule), there is insufficient published scientific evidence to suggest lauric acid provides any meaningful health benefits.

Coconut oil is more than 90 percent saturated fat. Butter, a distant second, is about 65 percent saturated fat. And like all fats, it’s also high in calories, weighing in at 120 calories per tablespoon. Using coconut oil when cooking Thai dishes and others recipes that call for the tropical oil won’t harm your health, but adding coconut oil to your diet probably won’t improve it, either.

The amount of research behind the healthy heart properties of olive oil is substantially greater than that available for coconut oil.

Let’s break this down in a heart-healthy and heart-unhealthy analysis:

With any efficient food source, the amount of calories per serving becomes important. Even healthy foods consumed in excess can become unhealthy. When it comes to calories, both oils are similar. One tablespoon of olive oil contains 120 calories, compared to 130 calories in a tablespoon of coconut.

For me, right now, olive oil is the best choice for heart health because:

Much more research supports the long-term benefits of olive oil in humans. The same may be true of coconut oil, but we just have to wait for the human data to come in to guide us.

The quantity of polyunsaturated and monounsaturated fats is clearly higher in olive oil. These good fats have many heart-healthy properties, including lowering inflammation, improving cholesterol, lowering risk of heart disease, and, in animals, lowering the risk of abnormal heart rhythms.

Tips To Eat Healthfully When Traveling for BusinessCan Pasta Help Me Lose Weight?

One thought on “Coconut Oil and Olive Oil, A Face-Off”