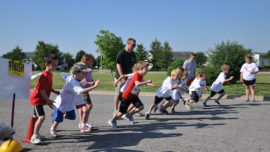 Both groups did three exercise sessions a week for seven weeks. The high intensity training (HIT) group’s program consisted of a series of 20-meter sprints over 30 seconds, while the children in the moderate intensity training group ran steadily for 20 minutes.

By the end of the seven weeks, teens in the moderate intensity group had completed a total of 420 minutes of exercise, compared to 63 minutes for those in the HIT group.