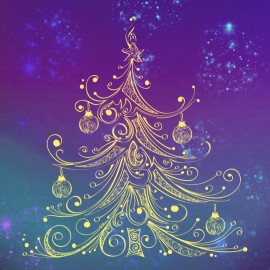 Ouch! I hit my head getting out of the car. The world was spinning and I saw stars. As I sat on the hood trying to clear my head, I saw something strange. It was a ghost. And it looked like my old high school gym teacher! He told me I was on the wrong path and that I needed to change. He told me that three ghosts would visit me in the very near future. Shaking my head, the vision disappeared and I brushed off the vision as a consequence of a mild concussion.

Later that day at the office, I was sitting at my desk. A faint knock on my door . . . and in front of me stood an apparition! “I am the Ghost of Fitness Past and I am here to remind you of what you once were.” We floated through time back to my high school and college days. He showed me working out with my friends, playing sports, and moving effortlessly through life. ”Remember!” he intoned seriously. At once, I was back in the office.

Later that night, I was sitting on the La-Z Boy reading the paper. I heard a sound. I looked up and there was the second ghost, the Ghost of Fitness Present. The room turned cloudy as he showed me my current condition. I was winded walking up more that three steps. I hired kids to to yard work, because it made my back hurt. Worst of all, I didn’t play with the kids too much, because of creaky knees. “It doesn’t have to be this way,” the ghost intoned.

As I was falling asleep that night, bright lights made me open my eyes. The Ghost of Fitness Future. He showed me two versions of my future. The first one involved me working out at Vertex Fitness. In that version, I was walking tall, moving with ease and grace, acting like I was 30 in a 60 year old body. Suffice to say the other version didn’t have a happy ending.

The last ghost disappeared. I woke with a start next to my car. I must have really hit my head hard. But, wait, what about the three ghosts? Did I imagine that? Imagined or not, I’m heading to Vertex and taking control of my future!