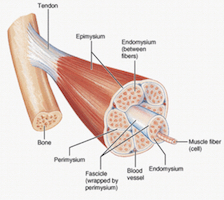 How many times have you heard us tell you to contract your muscles or pull this muscle here to produce this movement? Probably every workout, right? Have you ever considered what goes on in your body to make those muscles contract? Probably not.

Its actually pretty amazing all of the things that need to happen to get your muscles to work. Let’s take a look inside your muscles.

Your skeletal muscles are comprised of bundles of muscle fibers (a lot of the research I did for this was of British origin. They spell “fibers” like this: “fibres”. I always want to say fi-brays when I see it written like that. I digress.). These fibers are further broken down into myofibrils that contain the contractile proteins actin and myosin.

Skeletal muscles are also known as voluntary muscles, because they won’t contract unless they are told to contact. Therefore, the first step is a thought, “Lift that!”. An impulse is sent from the brain to the motor neuron that controls a specific muscle. A neurotransmitter (Acetylcholine-Ach) is released into the neuromuscular junction. The release of Ach causes the release of Calcium from the sarcoplasmic reticulum. Think of Calcium like a key for a lock. The actin filaments are intertwined with troponin and tropomyosin. Tropomyosin blocks the myosin from attaching to the actin (this would be the lock). The calcium comes in and bonds with the troponin. This bonding pulls the tropomyosin away from the binding sites and allows the muscle to contract.

Now you know how muscles contract.

Buckle DownThe Rise of the Superman