How Student Athletes can Maintain Discipline with a Personal Trainer 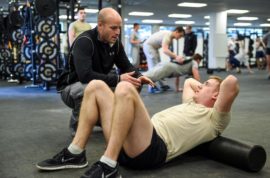 How Student Athletes can Maintain Discipline with a Personal Trainer

Schools are wrapping up their semesters, and thousands of student athletes across the country are graduating. But what happens to those athletes who are no longer students?

Many student athletes rely on the structure of a college schedule to maintain fitness during the school year. When you graduate, the endless parties, celebrations, and trips turn a string of cheat days. This translates into a brand-new lifestyle that puts exercise way at the back. It’s these transition times that set the stage for habits that you’ll carry for the rest of your life. In the weeks immediately after graduating, it will be up to you whether or not you want to end up rocking a soccer mom or dad bod in five years. If not, you’ll need to maintain a certain level of physical fitness for the rest of your life.

Discipline is Easier with a Buddy

The reality is that very few people are able to maintain the personal discipline it takes to commit to their own fitness regimen and go to the gym twice a week without any kind of accountability other than their own willpower. There’s a reason that America spends an estimated $61 billion dollars on the weight loss industry, for things ranging from diet foods, drinks, and low-calorie sweeteners, to health clubs and workout videos, to diet books and appetite suppressants.

There’s also a reason that gyms operate on a business model much like health insurance; they bank on the fact that people will buy memberships and then not actually show up. This podcast episode describes how a 300 person capacity Planet Fitness gym sold 6,000 memberships, and they probably won’t even fill to capacity. Don’t assume that you’ll be the rare exception to the rule who will  have the self-discipline to go without outside accountability. After all, everyone thinks that. The gyms count on it.

The Science of Student Athlete Performance

According to yet another study published in Medicine & Science in Sports & Exercise, “our data indicate that 12 wk of periodized, heavy-resistance training directly supervised by a personal trainer elicits significantly greater adaptations in strength performance compared with unsupervised training in moderately trained men. Although the physiological mechanisms responsible for the differences in the improvements in strength performance between the directly supervised and unsupervised groups cannot be surmised from the present data, it seems that the primary factor was related to the magnitude and rate of progression of the training loads by the supervised group.

Specifically, direct supervision promoted the use and toleration of greater training loads in the squat and bench press exercises during the heavy-load strength and peaking phases of the linear periodized strength-training program.” It goes on to say that “Based on the results of this study, we propose that direct supervision is an integral component to elicit optimal strength performance adaptations to periodized resistance training in highly motivated and moderately trained subjects”. (The influence of direct supervision of resistance training on strength performance, pg. 9) In other words, the young men in the study worked harder with a trainer. You can read the abstract of this study here.

For student athletes transitioning into their adult life, a personal training regimen is the way to go. A personal trainer will understand your particular needs and be able to properly take your fitness history into account. A personal trainer can also help replace the structure and accountability that you lose when you leave school. As a strength trainer at Villanova University, I worked with many, many exceptional student athletes. As dedicated as each of those athletes were, some of them were in the best shape they would ever be. This is because they would go on to let those good habits they had built up die away. It’s much easier to start while you’re ahead.

NOURISHED NETWORKING: How To Stay Healthy At Your Next Work EventHow To Break The Yo-Yo Diet Cycle