In the Spotlight with Andrew Kaplan, Health is Wealth 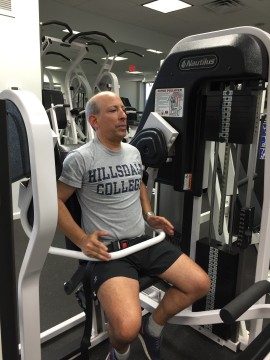 In the Spotlight with Andrew Kaplan

Health is wealth. Lots of famous people have put their own spin on that phrase (for example, Gandhi!) I guess that means that my job title should change from Personal Trainer to Wealth Management Advisor!

Andrew Kaplan is a true Wealth Management advisor. In January 2014, he realized that middle age was fast approaching. His job, which he loves, requires that he spend a large portion of his day sitting down. His back was hurting, his posture was poor, and he didn’t have the energy he once did.

Knowing that he had to get in shape, he researched different options. Eventually, his friend told him about Vertex Fitness. He was immediately drawn to Vertex because of the personalized service with attention to detail, the structured workouts that only take thirty minutes, and the overall cleanliness of the studio.

After only one year with the program, Andrew reports great results! By focusing on improving his strength, his posture is better which led to feeling less pain in his back. His golf swing is stronger and his drives are longer. Most importantly, he now worries about his kids keeping up with him and not vice versa!

Andrew is a fantastic Vertex client and provides more evidence that safe, efficient, effective exercise can be a boon for anyone.