Indulged Over The Holidays? 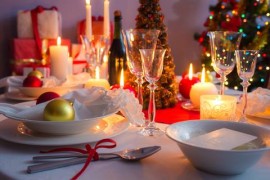 Indulged Over The Holidays?

Tis the season to indulged over the holidays with stuffing, turkey, buttery rolls, and pie, pie, and more pie. With all the office parties, cookie swaps, and holiday potlucks this time of year, it’s especially hard to avoid overeating. Hey, it happens to the best of us. But the real problem is usually what happens after—in our body and our mind.

Are you filled with regret, dejectedly pondering starting a juice cleanse? Do you wallow in the damage for hours or even days?

Don’t fret. Sometimes reframing the situation and having an action plan is all you need to rebound ASAP.

The guilt and anxiety that sets in following a food binge can be more damaging than the actual overeating session itself. Realistically, even if you gobbled down an entire pint of rocky road the night before, you’re not going to pack on a whole whack of weight from a single night of overindulgence. Look at a single binge as a temporary setback, but not like it’s the end of the world. The best food binge comeback is simply resuming your balanced, healthy diet and moving forward to avoid regular food binging.

After a night of salty-deep fried indulgence, water is key so drink up! We all know that when the body is thirsty we often feel hungry. However, following a night of consuming sodium and Trans fat-rich foods you will even feel more dehydrated. So be sure to drink a few large glasses of water first thing in the morning and keep a large water bottle nearby to sip throughout the day to flush out all the salt in your system.

The scale is not your ally the day following a food binge. So ignore the scale, particularly if your night of binging featured a lot of foods that were high in sodium. The excess sodium consumed will increase your normal weight by a couple of pounds of water weight, and only deter your motivation for resuming healthy eating. Instead, drink water and resume to eat a healthy, balanced diet for at least 72 hours. This will ensure the sodium is flushed out of your body.

It’s tough to wake up after a night of binging without guilt. However, if you starve yourself as a form of punishment you’re only triggering another inevitable—yet another binge. Instead, realize that you are only human and concentrate your energy on resuming a healthy, balanced diet and exercise routine.

Admit that to indulged over the holidays on food is the human condition. We all have our moments. As a popular inspirational quote says, “You are not defined by your mistakes, but your reaction.”

KISSmas 2015! A Vertex Holiday TraditionLet’s Do Some Christmas Lifts!