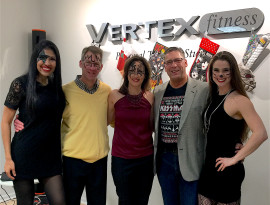 Once a year, the Vertex staff, family, friends and clients get together to celebrate the holidays in a unique way, the KISSmas way. KISS does not refer to the endearing gesture of affection but rather the legendary rock band, KISS. Dwayne Wimmer, owner of Vertex Fitness, a diehard KISS fan since 1977, decided to put his own spin on the traditional Christmas holiday party and called it KISSmas. This tradition has continued at Vertex since 2011. At the age of 13, his uncle Gene first exposed Dwayne to KISS. He received his first album, Rock and Roll Over for Christmas that year. And as Dwayne would say, “the rest is KISStory.” Attending over twenty KISS concerts, their induction ceremony into the Rock and Roll Hall of Fame, sailing on three KISS cruises, collecting A LOT of memorabilia; Dwayne epitomizes the meaning of being a true fan. But it’s not just the music, or the amazing shows the band still puts on today that keeps Dwayne a fan. Gene Simmons and Paul Stanley, KISS creators and front men, have built a brand that is timeless. He respects the icon status they have attained because of the trials, mistakes and hard times they had to endure. KISS has sold more than 100 million albums and has earned more Gold Album Record Awards than any American band in the history of The Recording Industry Association of America’s (RIAA’s) Gold & Platinum Awards certifications.  KISS is considered one of the world’s best selling bands of all time. They give back to their fans and communities and support and inspire others. They are true professionals in the music industry.

Because of this, KISSmas will continue to be celebrated year after year at Vertex. So, join us next year for food, music and fun! Put on your KISS face paint and t -shirts and party with us as we “rock n roll” all night. Holiday SpiritsIndulged Over The Holidays?