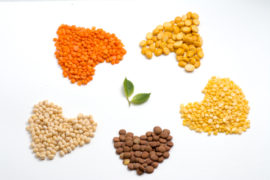 Lentils, the unsung hero of protein-packed food, is a delicious source of inexpensive nourishment. This tiny pulse seed, found in various colors, is a nutritional powerhouse that’s been used as a dietary staple worldwide for at least 8,500 years. Yet, this legume only reached the United States in the early 20th century. As recently as 20 years ago, the lentil was undervalued, underused, and underappreciated on our shores.

Find out more and why you should be adding them to your diet.

A single cup of cooked lentils contains 16 grams of dietary fiber, or 63 percent of the U.S. Department of Agriculture’s recommended daily allowance of fiber for an adult man or woman on a 2,000-calorie diet. Lentils contain some soluble fiber, but are an outstanding source of insoluble fiber. According to The Cancer Project, a diet that includes plenty of insoluble fiber can regulate bowel movements, promote digestive system health and may significantly decrease the risk of colon, breast, throat and esophageal cancer. Fiber-rich foods like lentils may also help prevent stroke, heart disease, diabetes, high blood cholesterol and hypertension.

Cooked lentils provide 18 grams of protein per cup, with less than 1 gram of fat, negligible saturated fat and no cholesterol. When compared to beef, poultry and fish, all of which are good sources of protein but contain much higher amounts of saturated fat and cholesterol, the Harvard School of Public Health names legumes such as lentils a better protein choice. A 2012 study published in the “Archives of Internal Medicine” reported that substituting lean protein sources like beans for red meat could lower your overall risk of dying from most diseases, including cancer and heart disease. Lentils do not contain all of the amino acids required by the body for protein synthesis. Combine them with a grain like rice or whole-wheat bread for a meal providing complete protein.

Each cup of cooked lentils has 358 micrograms of folate. This amount supplies nearly 100 percent of the 400-microgram daily requirement of folate for adults. Folate, also known as folic acid or vitamin B-9, supports nervous system health, aids in energy metabolism and is required for the synthesis of DNA, RNA and red blood cells. If your diet lacks adequate folate, you may be more likely to develop cancer, depression, heart disease and age-related vision or hearing loss. It is especially important for pregnant women to include folate-rich foods like lentils in their diets. Pregnant women who eat at least 600 micrograms of folate daily may lessen the risk of their child being born with a birth defect.

A cup of lentils provides 87 percent of the iron men need daily and 38 percent of the amount a woman needs. The body uses iron to produce red blood cells and adenosine triphosphate, or ATP. People who are deficient in iron may develop anemia or neurological problems like attention-deficit hyperactivity disorder. The iron in plant-based foods like lentils is nonheme iron, a form of iron that is not absorbed as easily as the heme iron in meat, poultry and fish. You can increase the amount of iron you get from lentils by eating the legumes with meat or with a rich source of vitamin C. Serve lentils in meat-based soups or braises, or toss them into salads featuring dark, leafy greens and orange or grapefruit segments.

Contrary to their main competition in the protein department (meat), they are super cheap. In fact, you can usually find a 1-pound bag of lentils for less than $1.00. Since food is increasing in price and will always be a big portion of your budget, it is a good idea to look for ways to save while still meeting your nutrient needs.

Unlike dry beans, which need to be soaked overnight, drained, rinsed, and then cooked for about three to four hours, lentils are much less of a hassle to prepare. Cooking time for most lentils is about 15-20 minutes. You will need to use two times as much water as you do lentils. For example, if you’re cooking one cup of dried lentils, you need to add two cups of water.

Green, black, and brown lentils cook the fastest and won’t become mushy–these are best in stand-alone dishes or on top of salads where you want the lentils to still have some textural integrity. Orange, yellow, pink, and red lentils are delicious as well, but they do tend to get a more mushy texture when cooked. Add these to your soups and sauces for a big boost of nutrition and flavor.

Rinse them thoroughly in a colander and check over them to remove any debris, rocks, or shriveled pieces. Bring the lentils to a rapid boil and then reduce the heat to medium-low and simmer. Do not add any acidic ingredients, such as tomatoes, vinegar, or citrus juices until the very end of the cooking.

You can keep them cooked in your fridge for about one week.

Think beyond the soup pot  — so many more culinary opportunities exist for this underappreciated food.