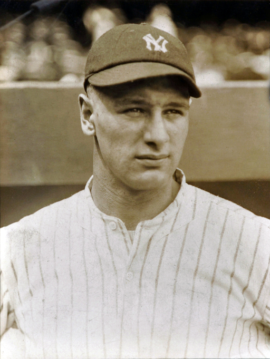 May is ALS Awareness Month, what is ALS, or Amyotrophic lateral sclerosis?  ALS is a group of rare neurological diseases that mainly involve the nerve cells (neurons) responsible for controlling voluntary muscle movement. The disease is progressive, meaning the symptoms get worse over time. Currently, there is no cure for ALS and no effective treatment to halt, or reverse, the progression of the disease. ALS is also commonly known as Lou Gehrig’s Disease— Lou Gehrig was a famous player for the New York Yankees in the 1930’s who was diagnosed with ALS after pulling himself out of the Yankee lineup. You may also recall seeing videos on your Facebook feed in 2014 of the ALS Ice Bucket Challenge.

What are the Symptoms of ALS?

Early symptoms of ALS usually include muscle weakness or stiffness. Gradually all muscles under voluntary control are affected, and individuals lose their strength and the ability to speak, eat, move, and even breathe.

Most people with ALS die from respiratory failure, usually within 3 to 5 years from when the symptoms first appear. However, about 10 percent of people with ALS survive for 10 or more years. In 2016 the Centers for Disease Control and Prevention estimated that between 14,000 – 15,000 Americans have ALS. Risk factors for ALS include age, gender, and race. ALS most commonly develops between the ages of 55 and 75, and men are more likely to get ALS than women. ALS is also most common in Caucasians and Non-Hispanics.

Finding the Cure for ALS

Dwayne Wimmer, owner and operator of Vertex Fitness, is a supporter of Augie’s Quest and attended the Bash for Augie. Augie’s Quest is an aggressive, cure driven effort focused on finding treatments and cures for ALS. According to the Augie’s Quest website, “All funds raised benefit the ALS Therapy Development Institute, the world’s largest ALS-dedicated drug development organization. Support comes from a huge network of national events and promotions, including the BASH for Augie’s Quest at the International Health, Racquetball and Sportsclub Association (IHRSA), the Tradition of Hope Gala in Beverly Hills, the Mile High Bash in Denver, and golf events in Newport Beach and Seattle.”

The story of Augie Nieto, founder of Augie’s Quest, is told in the film “Augie“. According to IMDB, “Augie Nieto is known as the Steve Jobs of the fitness industry. At 47, he was diagnosed with ALS. Since then, he and his wife Lynne have been on a quest to change the course of ALS. This is their love story.”

Exercise Induced Headache (EIH): What You Need to KnowLadies Night Out with Vertex Fitness: Presenting on “First Do No Harm”