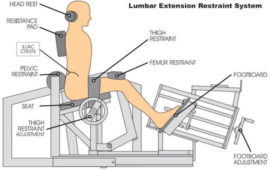 We’ve got some very exciting news–Medx Medical Exercise Equipment is here at Vertex Fitness, making us one of the only personal training studios in the United States to offer this excellent full line of equipment.

MedX is the brain child of legendary fitness visionary Arthur Jones, who founded the Nautilus line of equipment that we already carry in Vertex Fitness. In 1986, he founded MedX as a way to expand on his work testing human strength, endurance and range of motion. In conjunction with the independent research teams at the University of Florida, MedX created their medical Lumbar Extension machine, which has been used by thousands to reduce back pain and increase function.

The MedX line also includes the Cervical Extension, Rotary Neck and Rotary Torso, and Knee/Hamstring machines, which are used to produce specific and accurate tests of functional ability and as a tool in rehabilitative exercise. In addition to the medical exercise equipment that we are adding to the studio, MedX also offers a line of exercise machines which we have utilized since we opened in 2001, which incorporate their patented compound weight stack which produces less friction and enables several hundred levels of available resistance in increments of 2ft-lbs.

The Research Behind the Machines

As with everything that we bring to our clients, the MedX line of equipment is backed by a whole battery of independent scientific research that speak to its efficacy in increasing strength and improving function and quality of life. Arthur Jones’ work was validated by independent research teams at the School of Medicine of the University of Florida and San Diego, and he spent fourteen years in development of his equipment. He was trying to do something very specific–he wanted to develop a way to specifically strengthen the lower back, as he was seeing lots of people in strength training dealing with lower back pain. In order to target and strengthen these muscles specifically, he developed a patented pelvic restraint system. It was found that many machines that purported to work the lower back were actually targeting and strengthening the hamstrings and gluteus muscles instead. The University of Florida conducted a controlled study that found that people who worked out on two different “Low Back Machines” for 12 weeks actually gained no strength at all in their lumbar extensor muscles, but instead got stronger in their hamstring and gluteus muscles.

According to the DISC Sports and Spine Center, “The MedX Lumbar and Cervical Extension Machines have been clinically proven to be extremely effective in the treatment of chronic back and neck pain. Until MedX developed their patented restraint systems, there was never an effective way to isolate and strengthen the muscles of the spine.

Rehabilitation providers worldwide have experienced outstanding outcomes using the MedX Lumbar and Cervical Extension Machines. This is attributed to medical evidence that shows that the majority of patients with chronic spinal pain are significantly “deconditioned”. Weakness of the musculature of the spine can lead to many conditions such as herniated discs, facet syndrome, and degenerative joint disease. A strong spine provides a strong foundation that allows for healthy spaces between the vertebrae, which helps prevent spinal compression.”

The Benefits of MedX Equipment

MedX reduces the friction of traditional equipment from 30% to 0 and 5% friction. This makes a big difference in the ‘positive’ and ‘negative’ phases of resistance–when you push the weight up, and when you let it back down again.  If you had 100 pounds on a machine with 2% friction, you would be pushing 102 pounds during the positive phase of the movement and resisting 98 pounds during the negative phase. This is a four pound difference between pushing the weight up and letting it down. On traditional equipment, with 30% friction, that 100 pounds turns into you having to push 130 pounds during the positive phase and resisting 70 pounds during the negative phase, for a total difference of 60 pounds. That gives your muscles plenty of time to recover on the downswing, which severely impacts your ability to properly stimulate your muscles.

MedX allows you to set weight increments by 2 pounds, instead of five to ten pound increments. The method of strength training that we use at Vertex Fitness requires that you fatigue the muscle within 50-70 seconds, and not over a long period of time. If you increase the weight by too much, the muscle may fatigue too fast. If you cannot increase the weight because you must wait for a ten pound increment, the workout will not be as effective.

MedX offers a short one foot weight stroke, as compared to most equipment which has a weight stroke of two or more feet. This means that the weight stack movement of only one foot on a full-range repetition is safer and smoother than the competition with a longer weight stroke. A long weight stroke can also effect the amount of weight that you are effectively moving when you use the machine.

We are excited to offer this new equipment to our clients and to continue to provide the highest standard in personal training methods and techniques as shown by the scientific evidence.

Set Length is 70 Seconds, That is Long Freaking Time – (My Fitness Journey – Vertex Fitness Diary 10)Are You Over Thinking Exercise