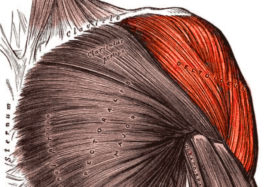 The deltoid is a triangular shaped muscle at the top of your shoulder. It plays a major role in moving and stabilizing your shoulder joint. The major movements the deltoid muscle is responsible for are arm rotation, arm flexion, as well as moving your arm towards and away from your body (adduction and abduction). It also helps you pull your arms behind your body. Think about when you are carrying a box out in front of you or lifting something over your head. The deltoid muscle helps you perform these activities.

Most people think of the deltoid as one big muscle in their shoulder. However, they do not 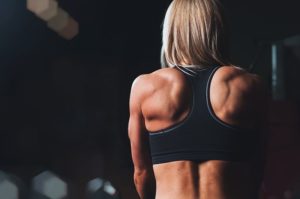 realize that the deltoid muscle is made up of three parts: the anterior deltoid, the medial deltoid and the posterior deltoid. The anterior deltoid has its origin in the collar bone. It is the part of the deltoid that helps with arm adduction, arm flexion, and rotating your arm inward.The middle deltoid has its origin in the shoulder blade. It is primarily responsible for arm abduction. The posterior deltoid also originates in the shoulder blade and is responsible for extending your arm behind your body, as well as lateral rotation. All three parts insert at the deltoid tuberosity of the humerus, which is the long bone of your upper arm.

Exercises for the Deltoid

Strong deltoids are crucial in order to carry out everyday activities, such as carrying objects, and can help prevent injuries such as torn rotator cuffs. It is important when exercising to strengthen all three parts of the deltoid. People commonly focus on the anterior deltoids because it is what they see when they look at their shoulder. However, it is crucial not to neglect the middle and posterior deltoid. Exercises to strengthen your deltoid include the shoulder press, front raise, lateral raise, and the upright row. The shoulder press and front raise work your anterior deltoid. The lateral raise works the middle deltoid, and the upright row works the posterior deltoid. At Vertex, exercises are carefully planned to target all three parts of the deltoid in order to maximize shoulder strength.

The Importance of Proper Breathing: What is Valsalva?Debunking the Spot Training Myth