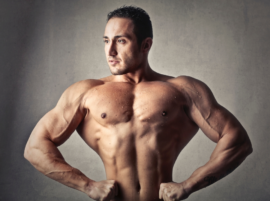 Muscle shapes determines function. This is true for everything. It is especially true for your muscles. There are over 650 muscles in the human body and each one has a unique shape and function.

Muscles can be classified into two broad categories of shapes, parallel and pennate. Each of those categories can be further broken down into more specific subgroups.

In parallel muscles, the fibers are arranged in a parallel manner the length of the muscle. This arrangement allows for a greater range-of-motion than a similar sized pinnate muscle.

The subgroups of parallel muscle include flat muscles (the obliques), fusiform (biceps brachii), strap (the sartorius), and convergent (the pectoralis major).

Pennate muscles have fibers that attach to its tendons at an angle (opposed to the parallel fiber orientation). This formation allows for a greater production of force due to a greater cross-sectional area.