Vertex Fitness | What are the Optimal Reps in a Set? Slow and Fast Twitch Muscle Fibers
InstagramLinkedinYouTubeGoogle+TwitterFacebook

What are the Optimal Reps in a Set? 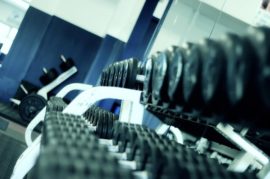 What are the Optimal Reps in a Set?

Recently, our contributing writer wrote a diary post in amazement at the fact that under the HIT method of strength training, which we practice here at Vertex Fitness, the ideal set length is a maximum 70 seconds long, with optimal reps between 8-12. We’re going to look at the science behind why we do it this way, using an article written by Wayne Westcott: Rethinking Repetitions. The reason has to do with the different types of muscle fibers that your body contains.

Your muscles are comprised of two different types of fibers, known mainly as Type 1 and Type 2. Type 1 is what we call a “slow twitch” muscle fiber, which has a smaller size than Type 2. These smaller, slower muscle fibers have less force capacity, but a higher ability for endurance. These are the most important muscle fibers for activities like long distance running, cycling, and swimming. Type 2, or “fast twitch” muscle fibers, are the opposite. They are larger in size, can generate more force, but they have less capacity for endurance. These muscle fibers are more important for power activities like sprinting, jumping and throwing. Slow twitch fibers fatigue more slowly and can complete more reps for any given resistance, while fast twitch fibers generate more force but can complete fewer repetitions.

The Science Behind Optimal Reps

A study was performed that tested 141 men and women and asked them to perform as many repetitions as they possibly could at 75% of their maximum resistance. They determined their maximum resistance by finding the maximum weightload that they could perform one time on the Nautilus 10-Degree Chest machine, working the pectoralis major muscles. (The Nautilus line of strength training equipment was developed by Arthur Jones, who also popularized the HIT method of strength training in the 1970s.)

After determining their maximum weightload, test subjects were asked to do as many reps as they could at 75% of that resistance. Most of the participants were able to perform between eight and 13 repetitions. According to the paper by Wayne Westcott, “This median group represented normal individuals with a relatively even mix of Type 1 and Type 2 muscle fibers.”

The chart below demonstrates the spread of participants:

The Optimal Reps for Your Fiber Type

Most of us have a more-or-less even mix of fast and slow twitch muscle fibers, as shown by the study, meaning that most of us get the best results by training with about 8 to 12 repetitions per set. This is where that “70 seconds” figure comes from–most of us can perform between eight and 13 reps in a single set at the target resistance before reaching muscle fatigue. If each rep, done properly, takes about 6-8 seconds, then most folks are hitting their optimal reps in a set that is between 50 and 70 seconds long. That’s what we practice here at Vertex Fitness–each exercise is done in one set, at the resistance in which you can perform about 8-12 repts. This is how we help you get the most out of each and every workout, and why you can get such thorough results in such a short amount of time each week.

One thought on “What are the Optimal Reps in a Set?”