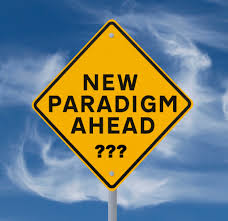 So how does one change a paradigm? When Nautilus rolled out their machines and training philosophy in 1970, they were attempting to change the paradigm that you needed to spend lots of time in the gym every day doing multiple sets.  Instead, Arther Jones suggested you could be just as effective doing a more efficient exercise protocol that ends up being much safer.  This protocol we now call High Intensity Training or HIT.

But did they change the paradigm? I’d say no, paradigms by definition are frameworks containing basic ways of thinking and methodologies that are commonly accepted. If Nautilus had truly changed the paradigm, then the majority of people who strength train would follow the HIT principles. Nautilus merely added a layer to the overall accepted strength training practices.

Changing paradigms require a couple of things: the first being an idea. Not just any old idea, but one that have a profound impact on many people. The next thing you need is lots of people to buy into the idea. It helps if there is a group of highly influential people to inspire the masses. The last thing necessary for a paradigm change is time. Much like a stone tossed into a pond, the idea has to start and then spread.

Change isn’t easy. As far as strength training goes, High Intensity Training has been proven to be safe, efficient and effective. I think those last three words should be the cornerstones of any strength training program.  Even with the proof of science, paradigms do not shift easy.

Read the other two parts to the paradigm shift series here…  Part 1, Part 2

Ashley Baptiste, I Am Healthier and Stronger Because of Vertex Fitness! -TestimonialStress Reliever – Sophisticate at “V” Fitness: Session 2.2

One thought on “Paradigm Shift Is Hard – (Part Three)”