Should You Try Pre Exhaust Training? 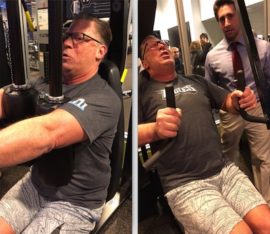 Should You Try Pre Exhaust Training?

The HIT (High Intensity Training) method suggests that you reach momentary muscular failure–that moment when you resist against the resistance, and for just a moment, you are incapable of overcoming the resistance. HIT is good for overcoming your strength plateaus to stimulate further muscle development beyond what you can reach with conventional training on your own, because you do relatively short sessions at high intensity. HIT provides lots of avenues to reach momentary muscular failure, depending on how you prefer to train and what equipment and training you have available. If you prefer to do more than one set of exercise for a muscle group, and want to fatigue more muscle fibers with each workout, Pre Exhaust Training may be a good choice for you.

What is Pre Exhaust Training?

How Should You Do Pre Exhaust Training?

Here’s an example: if you perform two sets of bench presses with the same resistance, you activate the same pectoralis major muscle fibers twice. This means that you work longer, but you don’t actually necessarily work harder–you just work the same muscle fibers more, rather than working more muscle fibers. Now, if you were to perform a set of chest fly followed immediately by a set of bench press, you would be able to further fatigue the pectoralis major. Performing the initial chest fly would lead to momentarily muscle failure and prevent you from doing more chest flies. When you follow up with the bench press, you recruit assistance from your fresh triceps, which allows your fatigued pectoralis major to work even harder and get a deeper fatigue.

What Pre Exhaust Exercises Go Together?

Remember, you want to target the same muscle groups with a single joint, followed by a two-joint exercise.

Here is a list of good pre exhaustion exercises:

To learn more about pre-exhaustion exercise or the HIT method, talk to a qualified trainer at Vertex Fitness.

Read more about the other Advanced Training Techniques: