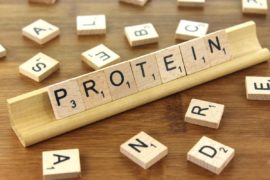 We recently discussed in a previous post whether protein has any effect on your muscles’ ability to recover from workout strain and rebuild muscle mass. According to science, it does. But does it affect other factors, like metabolism? And what about the other macronutrient you’re told to take, carbohydrates?

In a study titled “Timing Protein Intake Increases Energy Expenditure 24 h after Resistance Training”, researchers wanted to look at how protein after exercise affected your metabolism. The purpose of the study was to determine whether protein supplementation (PRO) before an acute bout of heavy resistance training (HRT) would influence postexercise resting energy expenditure (REE) and the nonprotein respiratory exchange ratio (RER). According to this study, “Several investigations have shown that a single bout of heavy resistance training can significantly elevate resting energy expenditure anywhere from 14.5 to 72 hours after heavy resistance training. In addition, studies report that the nonprotein respiratory exchange ratio (RER), an indirect assessment of substrate utilization, is decreased 24 hours after an acute bout of HRT. Taken together, these acute alterations could be critical for managing body composition during a longitudinal period.”

Your resting energy expenditure is otherwise known as your metabolism—essentially, how many calories you burn just being alive. The higher your REE, the more likely that your net calories for the day will be at a net loss, meaning that calories stored as fat can be burned. This study estimates that REE accounts for 60%–75% of total daily energy expenditure, and that elevating the amount of energy needed to maintain homeostasis at rest could influence whether there is a net positive or negative energy balance. Therefore, “it seems that HRT has an influence on energy and substrate utilization for an extended period after the exercise session has been completed”.

The study looked at nine resistance-trained men and women who had participated in strength training or weight lifting for a minimum of 3 days per week for at least 6 months before testing. They monitored their diet closely, and observed them while working out and aiming for close to maximum possible effort.

The main finding was that at 24 hours after heavy resistance training, resting energy expenditure was greater after protein compared with carbohydrates.”

Essentially, it looks like protein is the way to go if you are looking to incorporate weight loss with your resistance training regimen.

3 thoughts on “Protein and Metabolism”