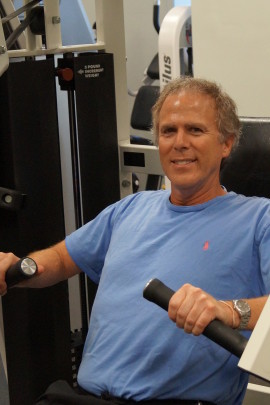 When I told Dr. Stephen Soll that I wanted to put him in the Spotlight, he told me that bright lights are bad for your eyes and that I should provide sunglasses for him. In retrospect, that is exactly the answer I would expect from an Ophthalmologist.
Stephen has been coming to Vertex for nearly two years. He had previously been a member of larger health clubs in the area. “ I tried to work out on my own, but I realized that I couldn’t. I needed motivation.”  As Stephen searched for a new fitness home, he  decided he wanted a facility that was smaller and provided more personal attention. Vertex met all of his needs.
Twice weekly workouts have made quite the impact on his life.He can attest to the power of consistency and to the benefits of having a trainer work him out effectively and efficiently each session. Says Stephen, ” I like working out with Todd!  My muscles are bigger, I am not tired and I feel better about myself. My energy levels at work and at home have improved!”
His results have been so good, in fact, that his 17 year old son started coming in with him in order to keep up with his father!
There is no higher compliment Vertex could receive than this one from Stephen: “I recommend Vertex to everybody!”
August 31, 2015By Dwayne WimmerBlog Spotlight TestimonialsLeave a comment

11 Ways to Motivate Yourself to ExerciseTo Stretch or to Squeeze?