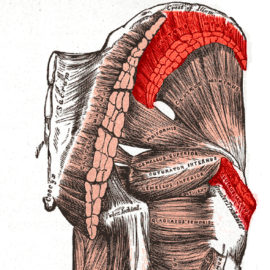 One of the most used, but least known muscles in the body is the gluteus medius. Partially covered by the Gluteus Maximus, the Gluteus Medius originates along the iliac crest and inserts into the greater trochanter.

The Gluteus Medius has two main functions in the body. One is to abduct the hip with the help of the Gluteus Minimus. The other function is to stabilize the hip. Hip Abduction occurs in the frontal plane and is defined as moving the limb away from the midline of the body. Almost every sport has some form of lateral movement so it is vitally important for all athletes to strengthen their hip abductor muscles.

This muscle also performs the vital function of stabilizing the hips. Specifically, when standing on one leg (or in mid-stride), a strong Gluteus Medius prevents the opposite hip from dropping. This obviously has implications for anyone who stands around on one leg or anyone who walks. Anyone who presents a dropped opposite hip while walking is said to have a positive Trendelenberg Gait.

Weak Gluteus Medius muscles are also thought to cause Iliotibial Band Syndrome and patellofemoral disorders (common in runners). While there are many strengthening modalities, a hip abduction machine is the most effective and efficient way to strengthen the Gluteus Medius. As always, it is best to work with a qualified Personal Trainer to learn the best and most effective ways to increase strength in the total body.

Making Time to Work Hard and SmartNever Give Up

2 thoughts on “Muscle and Function: The Gluteus Medius Muscle”