Muscle and Function: The Rhomboid Muscles 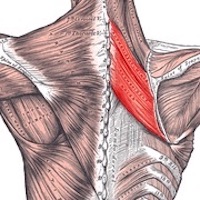 Muscle and Function: The Rhomboid Muscles

In thirty plus years in the health and fitness industry, I have never heard anyone say, “I really want to work on my Rhomboid Muscles!” However, despite their non-sexy role in human movement, the Rhomboids are very important muscles.

Located just underneath your trapezius muscle, between your shoulder blades are the rhomboid muscles. The Rhomboid Minor and Rhomboid Major originate from the nuchal ligament and spinous processes of the C7-T5 vertebrae and insert along the medial border of the scapula.

One function of the Rhomboids is to adduct the scapula. That means to pull them toward each other. If you can imagine trying to hold a pencil between your shoulder blades, you can know scapular adduction and feel your Rhomboids contracting.

Another function of the Rhomboids is to downwardly rotate the scapula. You get a feel for downward rotation of the scapula on a typical lat pulldown. As you pull the bar down, the inferior angle of the scapula rotates from out by your armpit back towards the spine.

One other important function of the Rhomboids (along with the serratus anterior and the pectorals minor) to keep your scapula against the rib cage. Dysfunction in one of those muscles can lead to “Scapular Winging” which can severely limit shoulder mobility.

There are two keys to maintain Rhomboid strength and integrity. The first is to use impeccable form when exercising. For example, not letting your shoulders rise on a chest press and pulling your shoulder blades down and back on a chin-up. Secondly, do a balanced strength training routine that incorporates all of the major muscle groups. Overemphasizing any muscle group at the expense of another leads to imbalances, which surely lead to injuries!