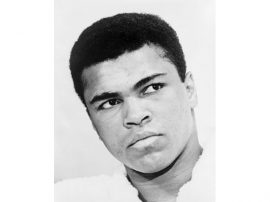 I was watching TV this Sunday morning. In resent years I have been getting more and more interested in politics and like to watch George Stephanopoulos on Sunday mornings when I am not working, I think he is brilliant.  Today is Muhammad Ali’s Birthday.  I started thinking about Muhammad Ali and his life.  What it meant to me, others, boxing, the world of sports and human kind.  When I was growing up, heavy weight boxing was as big as any sport, mostly because of Ali.  All of my friends were talking about Muhammad Ali, It didn’t matter who he was fighting he was the biggest name in sports.  As an adult I have grown to have a totally different level of respect for the man.  He was a master at playing the game.  His comments and antics were a way of promoting himself and to get inside the head of his opponent.  Everyone knew who he was and when he was fighting next.  I am sure he had some help from promoter Don King, but even Don King couldn’t tell Ali what to say and not say.  He was a household name because he wanted to be.  He was an amazing promoter of himself and the sport of boxing.

Life after boxing shows the kind of man ali truly is.  He has dedicated time to charities, even though he is becoming more and more disabled himself with Parkinson’s disease.  He seems to be a shadow of the man he once, but in my opinion he just continues to grow as a human being.  Muhammad Ali, what a wonderful human being.