The “Whey Protein” Effects Your Workouts 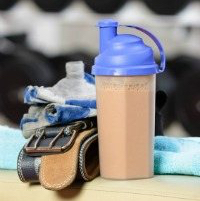 The “Whey Protein” Effects Your Workouts

If you’ve worked out in a gym ever in your entire life, you have probably heard the advice to eat or take whey protein immediately after. Some weightlifters, athletes, and other gym-goers do this dutifully without ever knowing why, assuming that it is common knowledge. Others insist that whey protein or other protein sources are necessary for the “rebuilding” stage of your muscles, after you’ve broken them down with heavy exercise. To find out whether that advice is true or just the result of clever marketing, we’re going to look at the science.

We can’t ignore the fact that fitness industry marketing has a heavy hand in this “common knowledge”. Almost everywhere that you could buy a candy bar, you can probably find a whey protein bar being marketed as some kind of performance enhancer or recovery aid. Gatorade sells a line of products intended for use at each stage of the workout known as the Endurance G Series. This line of products includes carbohydrate drinks and chews for energy pre-workout, drinks and powders to replace lost fluids and electrolytes during the workout, and protein bars to eat post workout to aid in the recovery stage. Whether this was capitalizing on the belief that you can eat certain foods at certain times to optimize your results, or whether this caused that belief, is unclear. In fact, doing a quick Google search of “pre- and post- workout Gatorade” leads to many articles discussing, not whether Gatorade is good to drink when working out, but when to drink it to capture the most benefit. Certainly, Gatorade’s marketing department has done their job well.

But here’s the question: how much does timing really have to do with your consumption of macronutrients and their effect on your body when you exercise? Is it true that you’ll get no benefit from your workout if you don’t fix yourself a vanilla powdered protein shake afterwards?

The Department of Health and Human Performance at the College of Charleston in South Carolina ran a study called “Effect of Whey Protein in Conjunction with a Caloric-Restricted Diet and Resistance Training” by Wesley D. Dudgeon, Elizabeth P. Kelley, and Timothy P. Scheett. This eight-week study focused on men 21-28 years of age with no relevant health issues who were trying to increase lean mass to improve athletic performance while simultaneously losing fat mass.

According to the study, “Oftentimes, individuals partaking in a caloric-restricted diet, in addition to a vigorous resistance-training regimen, risk creating a negative protein balance, where the rate of protein catabolism exceeds the rate of protein synthesis. This may lead to muscle degradation, reduced muscle adaptations, performance, function, and recovery if left uncorrected. The expedient ingestion of nutrients after the cessation of exercise is required to help ensure the transition of net muscle protein balance from negative to positive. Protein supplementation increases muscle protein synthesis without a corresponding increase in protein degradation, which results in net positive protein balance, allowing for maximal recovery, hypertrophy, and strength gains. Therefore, in addition to fat loss, muscle maintenance is of primary concern throughout the duration of the “cut diet”, and requires adequate dietary protein consumption in both athletes and non-athletes. Increased consumption of dietary protein during weight loss interventions promotes a greater loss of fat mass and retention of muscle mass, the latter of which directly contributes to elevated resting metabolic rate.”

The study ultimately found that while all of the participants experienced fat loss during their caloric restrictive diet and resistance-training regimen, only the control group lost lean mass while the group being provided Sciavation-brand protein supplementation post-workout retained their lean mass. There is one feature of the study that should be taken into consideration, however: “The authors would like to thank Sciavation Inc. for providing product and funding for this research.”

Another study done by Brad Jon Schoenfeld, Alan Aragon, Colin Wilborn, Stacie L. Urbina, Sara E. Hayward and James Krieger was called “Pre- versus post-exercise protein intake has similar effects on muscular adaptations”. Recall that the first study looked at the effects of protein supplementation on lean muscle mass, but not the time that the protein supplement was taken in relation to the workout.

According to that study, “To the authors’ knowledge, this is the first study to directly investigate muscular adaptations when consuming protein either immediately before or after resistance exercise in a cohort of trained young men. The primary and novel finding of this study was that, consistent with the research hypothesis, the timing of protein consumption had no significant effect on any of the measures studied over a 10-week period. Given that the PRE-SUPP group did not consume protein for at least 3 hours post-workout, these findings refute the contention that a narrow post-exercise anabolic window of opportunity exists to maximize the muscular response and instead lends support to the theory that the interval for protein intake may be as wide as several hours.”

So… is taking protein to enhance your body’s ability to recover and benefit from a workout a complete crock? No. There is evidence that protein can help you maintain lean muscle mass. However, the precise timing of when you consume your macronutrients is not as important as Gatorade and most folks on weight-lifting forums would have you believe. Your body is not a machine, and there are so many factors that go into how it operates and changes. Protein is not available to be utilized by your muscles the minute you bite into some chicken or swallow down a protein shake, so keep that in mind. You are going to get the benefit of protein consumption whether you eat it before or after your workout. One compelling reason to eat it after, however, is pretty simple—eating anything afterwards will help you feel better from the immediate effects of fatigue and muscle strain after your workout.

Interview on Proven Strategies for Adding Muscle and Increasing Strength at Any AgeNOURISHED NETWORKING: How To Stay Healthy At Your Next Work Event

4 thoughts on “The “Whey Protein” Effects Your Workouts”