Are You Working Hard Enough? 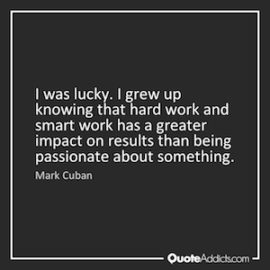 Are You Working Hard Enough?

I actually had something else in mind to write my blog about this week, but Dwayne sent something out to the Vertex team that really inspired me and I wanted to continue the discussion. What he sent was a video of an interview with Mavericks owner and self-made billionaire Mark Cuban talking about his biggest regrets in life. Here is someone who has reached an elevation in life that is beyond what many of us can even dream of, and this someone who has worked his tail off to get to where he is, and to hear that his biggest regret is “NOT working hard enough” gave me a big old slice of humble pie.

As many of you know I have started on my own journey to what I hope one day is success; I have only just started out on this road and am already hitting the proverbial highway pit-stop a few times to allow for me to catch my breath. Now after watching this video, which I suggest everyone do (link is attached earlier in this blog), a sense of inspiration and as I said earlier humility have allowed me to re-center myself. This is a very big world, full of very smart and hard working individuals, just waiting for their chance at a better life. Mark Cuban is an individual who knows that and has worked everyday with that as his driving force to accomplish the things he’s accomplished. I ask you to look back at your greatest accomplishments or achievements; when you do, how do you feel? Let me guess…..AMAZING! I mean come on these are some of the best moments of your lives that we are talking about here. But continue to think deeper about each experience and how you were able to get to that moment. It was because of hard work, dedication, overcoming odds that were against you at times and not taking no for an answer when that’s all you were hearing. You earned those moments because you worked harder than everyone else, your passion was so deep that nothing was going to stop you.

It was brought up in the Vertex teams discussion that its easy to work hard for things that we are passionate about because you are willing to put forth the effort, but the things that you “have” to do or “get done” are the more difficult tasks because they are the least desirable and draw the least amount of our effort. When you stop and take a closer look at these “have” to do events, they are probably the ones that will be the most beneficial for you in the long-term.

I challenge you this week; when you are feeling tired or feel like you worked hard enough, think about Mark Cuban the self-made billionaire who is out there wishing he worked harder at times in his life, I know I will!

“Are You Working Hard Enough?” was written by a Former Vertex Staff Member

The Vertex ShufflePractice Makes Perfect or Nature or Nurture?