Vertex Fitness | Why Do I Yawn When I Work Out? Anaerobic Exercise
InstagramLinkedinYouTubeGoogle+TwitterFacebook

Why Do I Yawn When I Work Out? Anaerobic Exercise 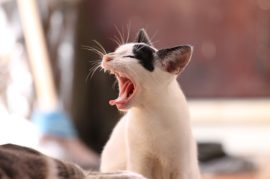 Why Do I Yawn When I Work Out? Anaerobic Exercise

Most have experienced it; you get off the machine during your resistance training workout, and you let out a big, involuntary yawn. Maybe your trainer even cracks a joke about boring you. It’s more common than you may think, and the reason has to do with your oxygen intake. Working really hard can cause your body to run on an oxygen deficit, which you compensate for with a yawn. To understand why this happens, we need to take a look at the definition of aerobic vs. anaerobic exercise.

What is Anaerobic Exercise?

Aerobic means “with oxygen”, and anaerobic refers to “without oxygen”. Aerobic exercise, also commonly referred to as cardio, is exercise that utilizes the oxygen you breathe for the energy needed to do the work. Endurance exercises like jogging tend to get much of their energy from oxygen, which is why they make you start breathing harder. When the work you perform requires more energy than can be gained through the aerobic process, it is known as anaerobic exercise, and it starts to recruit energy from sources inside your muscles, like glucose. Examples of anaerobic exercise include sprinting, jumping, and resistance training. Anaerobic exercise is characterized by relatively short bursts of high-effort activity that create an oxygen deficit in your body, which is why you tend to yawn between sets during resistance training workout.

Is Anaerobic Exercise a Good Thing?

If you’re doing more work than your body can support via your aerobic systems, does that mean you’re doing something wrong or pushing yourself too hard? Not at all. Your anaerobic system is designed to help you do more intense work for a shorter period of time, which is the principle behind High Intensity Training and other strength training regimens. Anaerobic work causes lactic acid to build up, and it appears that regular exercise of this type may help your body deal with and eliminate lactic acid more effectively, improving your endurance.

I Thought Yawning Was All About Fatigue and Boredom?

Not necessarily. Scientists still don’t understand everything about yawning or why we do it–it is observed to happen when you’re sleepy, when you’ve just woken up, and when you’re bored. But it also can happen just because you see somebody else do it. It is a semi-voluntary action, which means that it is a reflex that your body does in response to certain stimuli. One of those stimuli is oxygen deficiency.

To get a yawning-good workout in, take us up on a complimentary first session at Vertex Fitness and discuss starting a resistance training program.