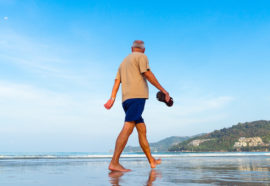 The effects of aging on health and well-being are well documented in the medical literature–as you age, you lose muscle mass, strength, and bone density. You can accept this as an inevitability, or you can do something about it. The research has shown over and over again that a resistance training program can actually reverse some of the natural muscle and bone loss that you experience as you age. To figure out the science behind it, we’re going to take a look at the clinical study “The Effects of 6 Months of Progressive High Effort Resistance Training Methods upon Strength, Body Composition, Function, and Wellbeing of Elderly Adults”

After just 6 months of resistance training twice a week, the average participant in this study doubled their strength test scores in every category. The study showed significant improvements in chest press, leg press, and seated row tests. On top of that, each percentage point of muscle they gained was matched by a point of fat melting away.

Unfortunately, these results were not matched in the weight loss category. Participants knocked an average of half a point off their BMI, but exercise alone isn’t as effective for losing weight, especially as you age.

When the researchers checked in on all of the participants 6 months after training, all participants had lasting results. All participants who stopped working out scored higher than they had started but lower than when they were actively training with a supervisor. Other studies have shown that aging adults lose strength and power quickly–one study showed that you could lose a third of your gained strength just four weeks after stopping a training program.

That being said, even the participants that stopped training after the initial six months scored higher in strength and body composition than when they started. They all said that climbing stairs and common “carrying tasks” (like using a grocery basket at the store) were significantly easier. A few even said there was no strain at all. That’s an investment in fighting aging from going to the gym only about fifty times in total!

The study provided six months of supervised training followed by six months of unsupervised access to the same gym. At the end of the year, over half of the participants continued to train without supervision. Around 57% stuck with it. Participants in another study showed that older adults made other healthy changes to their life as they trained. They started eating healthier, felt more energetic, and participated in more physical activity outside of training.

It’s clear that high effort resistance training can make you stronger and more physically confident. Exercising regularly is a proven way to increase strength, body composition, and well-being in older adults and remains the single most effective way to improve your health at any age.