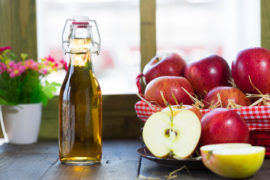 Apple cider vinegar or “ACV,” as it’s called among enthusiasts—is having its superfood moment. Made from fermented apple sugars, ACV’s rumored perks range from helping with type-2 diabetes to whitening teeth.

But can it help you lose weight?

There are three things you should remember if you are trying to lose weight or improve health with apple cider vinegar.

When it comes to weight loss and health, there is no magic elixir or replacement for a balanced diet and exercise.

Claims of “Drink this, lose weight!” generally sound too good to be true for a reason. One recent study of 14 people showed that those who drank a tablespoon of apple cider vinegar mixed with 8 ounces of water before a meal had lower blood glucose levels. This may be because vinegar interfered with the body’s digestion of starch. By blocking digestion of starch, that would result in a calorie reduction of your meal. So that’s possibly where [those weight claims] came from.

In other words, don’t bank on apple cider vinegar when healthy eating and good old-fashioned exercise will do. If you’re set on incorporating apple cider vinegar in your diet, do it in moderation. You never want to take it just straight. Even better: Mix it with olive oil and use it to top your salads as a low-calorie alternative to your usual ranch dressing.

To Macro Or Not: Should You Track Your Macronutrient Intake?Self Care Means That You Do Not Get To Skip Leg Presses – (My Fitness Journey – Vertex Fitness Diary 3)