Vertex Fitness | How Can I Eat Smaller Portions and Still Feel Full?
InstagramLinkedinYouTubeGoogle+TwitterFacebook

How Can I Eat Smaller Portions and Still Feel Full? 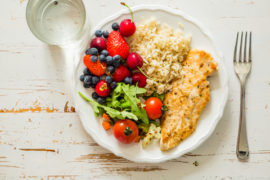 How Can I Eat Smaller Portions and Still Feel Full?

Need to lose a few pounds? These simple tips will make it easy to cut back without feeling deprived.

Portion control doesn’t mean you have to eat tiny portions of everything. You don’t want to feel like you are on a diet, but you have to eat fewer calories. Here are 3 tips to cut portions, trim calories and lose fat without counting the minutes until your next meal.

Water has no calories but it takes up a lot of space in your stomach, and that creates a feeling of fullness or satiation. A study found that people who drank two glasses of water before meals got full sooner, ate fewer calories, and lost more weight. You can put the same strategy to work by choosing foods that have a higher water content over those with less water.

For example, the only difference between grapes and raisins is that grapes have about 6 times as much water in them.  That water makes a big difference in how much they fill you up. You’ll feel a greater degree of satiation after eating 100 calories worth of grapes—which is a small bowlful—than you would after eating a hundred calories worth of raisins, which is only a quarter cup.

Salad vegetables like lettuce, cucumbers, and tomatoes also have a very high water content, as do broth-based soups. If you start your meals with a salad or bowl of soup, you’ll probably consume fewer calories at those meals.  And if you’re looking for a between-meal snack, whole fruit will probably fill you up for fewer calories than dried fruit.

Fiber draws water from your body and from the food you’ve eaten, and transports it to your intestinal tract, helping to deliver that meal-ending satiation, according a study.

Fiber may boost satiety, too. Since it passes through the body undigested, fiber slows the absorption of nutrients and makes you feel fuller longer. A 2009 study in the Journal of the American Dietetic Association found that adding 6 grams of soluble fiber (such as ground flaxseed) to yogurt provided the satiating power of an additional 260 calories. To reap the satiating benefits of fiber, aim for 25 to 35 grams daily.

Refined carbohydrates, on the other hand—like in those Krispy Kremes—are satiety killers. When participants in a study drank a high-carb beverage for breakfast, they reported feeling hungrier at lunch than when they drank a beverage high in protein. Here’s why: Too much sugar brings on a rapid spike in insulin, which causes a sugar crash later and triggers a craving for more food.

The more the quickly your food is converted into glucose and absorbed into the bloodstream, the more quickly you’re going to feel hungry again.

Foods that are high in fiber include dried beans, bran, vegetables, and whole grains. So for example, a high fiber cereal will keep you full longer than a low fiber cereal. At lunch, a cup of black bean or split pea soup will go further than a cup of cream of mushroom, and so on.

Tip #3: Replace Some of the Starches in Your Diet with Protein

Another big factor in regulating your appetite is how fast your blood sugar rises and falls after meals. In a nutshell, the more the quickly your food is converted into glucose and absorbed into the bloodstream, the more quickly you’re going to feel hungry again.

Carbohydrates are broken down into glucose much more quickly than proteins and fats, which require a lot more digestive steps to convert. Research consistently shows that dieters who eat fewer carbs and more protein are not as hungry as those who eat a higher percentage of their calories as carbohydrates.

So, for example, instead of a sandwich consisting of two slices of bread and a slice of turkey, have an open faced sandwich with one slice of bread and two slices of turkey. Both sandwiches have about the same number of calories but the higher protein version is going to keep you satisfied for longer. At breakfast, you could have an extra egg and one fewer pieces of toast. And instead of having a handful of pretzels for a snack, you could eat a few pretzels and some cheese.

Of course, you can also replace starches with an extra helping of vegetables, which are high in both fiber and fluids.

I’m not saying that you don’t have to pay attention to calories or that you never have to exercise any restraint. After all, we overeat for lots of reasons, not just because we’re hungry. But choosing foods that are higher in water, fiber, and protein and dialing back the amount of starches and sugars in your diet can help you feel satisfied with fewer calories—which can make it a lot easier to maintain a healthy weight. As a bonus, following these strategies also tends to steer you toward more whole, nutrient-rich foods, which improves the overall quality of your diet.