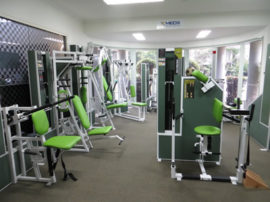 This week, we are going to continue our look at the article published by Wayne Westcott, PhD for Current Sports Medicine Reports titled “Resistance Training is Medicine: Effects of Strength Training on Health“. (You can catch Part 1 of this post here.) According to the article, inactive adults experience declining heart health, accompanied by a slowed metabolism and weight gain as they age. The good news is, there is a way to fight back against the aging process with resistance training. Let’s take a look at some of the health benefits shown to occur with a resistance training program:

Type 2 diabetes is a serious health concern for many Americans, verging on an epidemic–some sources predict that one in three adults will be affected by diabetes within the next fifty years. Fortunately, the link between diabetes management and exercise is well-documented in the medical literature. Exercise seems to be able to counteract the decline in insulin sensitivity as we age, as well as improve insulin resistance and glycemic control, which can prevent the onset of type 2 diabetes. Exercise can also reduce your abdominal fat, which also appears to have a link with diabetes. The American Diabetes Association recommends working out with a higher intensity and at a higher volume to improve the health benefits gained. Resistance exercise can help both prevent and manage type 2 diabetes.

It’s a common misconception that only “aerobic” style exercises come with heart health benefits, but the science disagrees. It appears that resistance or strength training also carries comparable cardiovascular benefits. A 2011 literature review by Strasser and Schobersberger states that, “resistance training is at least as effective as aerobic endurance training in reducing some major cardiovascular disease risk factors”. It turns out that resistance training can lead to improved body composition, the loss of abdominal fat, reduced resting blood pressure, improved lipoprotein-lipid profiles, and enhanced glycemic control. This is good news for your heart!

Many Americans, as many as thirty percent, struggle with hypertension (known as high blood pressure). This is a major factor in the onset of cardiovascular disease. Strength training can reduce your resting systolic and/or diastolic blood pressure after only two months of regular training. Several studies have shown that subjects who trained twice a week significantly reduced resting systolic and diastolic blood pressure readings, and subjects who trained three times a week reduced their readings by even more.