Steve Morrison From Clanking Weights to Getting Results – Client Spotlight 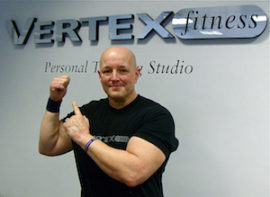 Steve Morrison From Clanking Weights to Getting Results – Client Spotlight

Steve Morrison, who you may recognize as a morning host of WMMR’s Preston and Steve Show in Philadelphia, is known for his humor and quick wit. After joining Philadelphians on their morning commute, he makes the ride over to Vertex Fitness Personal Training Studio. Morrison has cared about his health and fitness for a long time, and he sat down with us to share why he trains with Dwayne Wimmer at Vertex Fitness.

Before working with Dwayne at Vertex, Steve began his fitness training with a much more typical, if not more effective, routine. He’d go to a “clunky weights“ type gym, stretch a little bit, and then start racking weights for the next hour or two. He was spending a ton of time lifting heavy weights with poor form and little regard for exercise sequencing, but he stayed stuck in that routine for years because that’s what everyone was doing.

Steve was skeptical about working out at Vertex Fitness at first. The hardest part for Steve to believe was the Vertex claim that we could give him a good work out in 30 minutes or less, while working out only two or three times a week. As Steve explained, “It just seemed ludicrous that you could get a good work out in a half an hour, especially since I was clocking about an hour and a half, two hours, depending on what day of the week it was.”

After his first sessions with Vertex owner Dwayne Wimmer, Morrison began to see the light. As Steve Morrison explains, “I remember driving home and thinking ‘wow that was exhausting.’ But energizing at the same time.”

The biggest upgrade to his new routine was a newfound emphasis on form and tempo. Morrison’s trainer wasn’t just making him rack weights as heavy as he could get them, but made him slow down and do each exercise and rep with the proper form and at a tempo that forced the muscle to reach maximum effort after just one set. The result was that exercises that had become easy while being done by himself suddenly felt much more difficult again, giving him better results in less time.

This is a key component of the Vertex Fitness ethos. A muscle needs to reach the point of fatigue and momentary failure in order to be pushed to adapt and grow stronger. When you make up your own routine, it’s very rare that you’ll be able to push yourself past the point of muscle fatigue, even if it feels like you’re working hard. We talk more about this phenomenon in our post about working without a trainer. Even though Steve was racking weights for hours at a time, he wasn’t actually pushing his muscles consistently to the point of fatigue, and so was spinning his wheels without results.

When asked how he’s benefited from his Vertex workouts, Steve Morrison says it’s the time he’s saved. He’s now spending the extra hours that used to get swallowed up in the gym on other things.

By working with a personal trainer, Morrison explains that he gets a concentrated, well designed workout that produces results. The trainer leads him from one exercise to the next in a time-effective way and insures Morrison uses proper form and intensity on every rep. This produces a full body workout that gets his heart rate up and delivers aerobic as well as anaerobic benefits.

As Morrison says, “When I’m on my game, I can get a full, comprehensive workout completed in 25 minutes. Which is astonishing.” For Morrison, working out at Vertex is a great example of “less is more.” He says, when it comes to the Vertex system, “Less done properly gives me much more and greater long-term benefits.”

Morrison has also noticed that workout injuries have virtually disappeared.  Before Vertex, he would get an injury from working out every five or six months. As Steve Morrison explained, “In the 14 plus years that I’ve been working out with Dwayne, I have never had a workout related injury. In fact, I’ve gone in with injuries, and Dwayne worked around the injury and helped accelerate my recuperation.”

Morrison’s fitness regime got some serious validation in 2015. After being diagnosed with prostate cancer, he had it removed and returned to work after just three days, which his doctors credited to his workout regime and good fitness going in. We wrote more about Steve’s recovery and the strength training / cancer connection.

The Science Behind the Method

The Vertex system focuses on the science of how muscles respond to exercise and need to reach failure to adapt. Once they hit that threshold, they will respond by rebuilding bigger and stronger. Morrison pointed out that doing more reps doesn’t increase results, and in some cases its counterproductive. Instead of focusing on how many sets and reps he’s doing, Morrison focuses on doing each rep. He says, “I no longer count reps, I leave that up to Dwayne, or whoever the Vertex trainer is. I’ve trained myself to not pay attention to the count, and just do each rep to the best form I can possibly do.”

Working with a Vertex trainer helps your mental capability by forcing you to work through both physical and mental barriers. Trainers get clients to the point where they reach a predetermined objective and think they’ve maxed out. Then, with a slight assist, clients do another rep or two. This ensures that they are giving their maximum effort. That’s why Morrison says, “I work out with my eyes closed because I don’t want to know when Dwayne is jumping in for the assist. It forces me to commit as hard as I can to stay with it.”

Morrison points out, “I’m 58 right now and I’m in pretty damn good shape. Vertex has been my main method of working out for over 14 years. My best workouts last 25 minutes and are with the trainer. It’s a completely converse perception of exercise as was the one I held 15 years ago. But now I’m happy to spread the word.”