Pre- and Post Workout snacks and meals are important, but did you know that they don’t provide energy to your muscles and cells? That energy source for your body’s working tissue is Adenosine Triphosphate (ATP). The is what is used in fueling your workout. 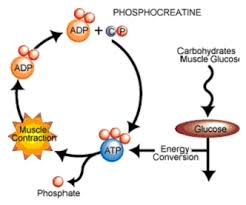 ATP is a molecule that consists of adenine, a ribose group and three phosphate molecules. When a muscle receives a signal to contract, ATP is broken down into Adenosine Diphosphate (ADP) and an inorganic Phosphate molecule by a process called ATP hydrolysis. The energy that our muscles use is not from the adenosine or from the phosphate, but rather from the bond that hold the Phosphate to the adenosine.

To ensure a steady stream of energy is available, ADP must be recycled into ATP (this is where food comes into play). There are three main ATP regenerating systems, two of which do not require the presence of oxygen and therefore predominate strength training workouts. The first system to re-make ATP is called the Phosphagen system. This system lasts for approximately 30 seconds. Creatine Phosphate donates its Phosphate group to ADP to remake ATP (interestingly, Creatine Phosphate can only be recycled by using the energy from an ATP breakdown).

Once Creatine Phosphate store have been depleted, Anaerobic Glycolysis kicks in. Glucose, the final breakdown of carbs is broken down in the cytosol into pyruvate and, eventually lactate, while yielding 2 ATP (it actually yields 4 ATP, but you have to spend two to get the whole thing started). This system lasts approximately two minutes.

There you have it! That’s how you get energy for fueling your workout!

Are You Afraid Of Eating Fruit Because Of Its Sugar Content?Joanne Vails – Single Mother With Shoulder Injury Workout Gets Great Results – Testimonial