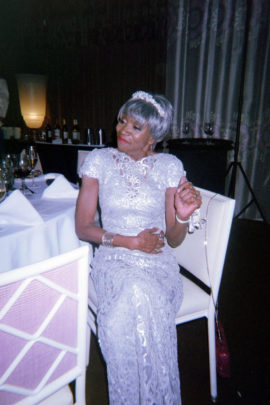 At Vertex Fitness, we help people get back on their feet and bounce back from difficult health issues feeling stronger and more like themselves. Today’s spotlight, struggled with lung cancer and knee surgery before coming to Vertex Fitness to get her groove back, allowing her to dance at her daughter’s wedding.

Nikki Keach is retired from being a professor at Temple University of Linguistics. Since retiring six years ago she’s been doing some writing, gardening for flowers, vegetables, herbs, annuals, and perennials, and working on a three-year training course in transpersonal breath work, a type of meditation that took her to Germany for additional training.

Nikki lives in Ardmore but was born in Washington D.C., and completed her undergraduate Bachelor of Arts at Howard University in Washington before moving to Massachusets in New England to get a second degree from Boston University in Education. She then achieved a PhD in Theoretical Linguistics at University of Massachusetts in Amherst. Nikki has a daughter who lives in Philadelphia.

Nikki started at Vertex Fitness in September 2017. She’d been in physical therapy after shattering her knee, and was also treating a diagnosis of lung cancer. According to Nikki, “I lost a whole lot of weight before I stopped the treatment. I was able to stop the treatments a few months before my daughter’s wedding so that I wouldn’t be so weak and miserable. When I stopped the treatments, I started feeling better, but I knew I wanted to start personal training at that time because I was a mess.” Nikki’s goal was to feel better in her everyday life, but she also wanted to be able to dance at her daughter’s upcoming wedding, so she went to physical therapy and did personal training at Vertex concurrently. As Nikki says, “The physical therapy ended before I ended the personal training. I kept going with the personal training because I also started going to Planet Fitness and going to Vertex once a week. I figured that learning how to do the correct position of my body and use the machine would help and benefit my workouts.”

Nikki’s family noticed that she was both looking and feeling better after her workouts at Vertex Fitness. “My daughter tells me these things. I just don’t pay that kind of attention to myself. My daughter tells me that I look a whole lot better, and Dwayne tells me that I look stronger. I feel a lot stronger. I was able to use my legs, use both legs, especially the left one that got a little screwed up. So those are the changes that I notice. My appetite has increased, which was a problem with the treatments. When I did eat something, it just tasted awful. Chemo really messes with your taste.”

When asked what advice she has to give for someone facing down similar health issues like lung cancer and knee surgery, “I’d say personal training is just exactly what I needed. I mean it not only helps with your whole physicality, but it also helps with your frame of mind. Sort of doing the work and being encouraged to go a little further when you don’t think you have it, but you find out you do have it. It increases your self esteem. I think one of the things that can happen when you’re immobilized like I was or just sick from the whole lung cancer business is it kind of gets you down. But I think doing personal training, just having these goals of so many reps, and then going a couple more, and achieving those goals, those helped me immeasurably.”

“Vertex for me is Dwayne. He was my trainer. Vertex is quite different than going to Planet Fitness all by yourself. Going to Vertex you’re just getting attention, you’re being listened to. Vertex is very special, and Dwayne is a very special trainer.”