Muscle and Function: The Serratus Anterior 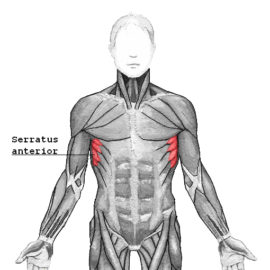 Muscle and Function: The Serratus Anterior

This muscle is sometimes known as the “boxer muscle”, because it’s the muscle along the sides of the torso that make boxing athletes look so shredded. Tucked away on the lateral thoracic wall of the body, this muscle received its name from Latin origin due to its saw-toothed appearance. In most cases, this muscle can be found by palpating between the pectoralis major and the latissimus dorsi, and can be easily spotted in athletic individuals with lower body fat stores, like Manny Pacquiao.

At first glance the serratus anterior may appear to be a group of individual muscles but it’s actually one large fan shaped muscle that originates from the anterior surface of the first 8 or 9 ribs. These smaller muscles come together wrapping around the outside of the ribcage and insert underneath the scapula (or shoulder blade) along the medial border.

The anatomy of the muscle is further broken down into three portions: the superior, medial, and inferior. The superior portion originates from the 1st and 2nd rib and inserts into the superior angle of the scapula providing the stability needed for scapular rotation. The medial portion of the muscle finds its origin on the 3rd, 4th, and 5th rib and inserts along the medial border helping to protract the scapula. Lastly, the inferior portion originates from the 6th-9th rib, inserting into the inferior angle, serving to protract and laterally rotate the scapula. Among the three, this is the most powerful section of the entire muscle.

The long thoracic nerve originating from the cervical vertebrae C5-C7 supplies nerve innervation for the serratus anterior, allowing motor and sensory impulse to travel from the brain to the muscle, and vice versa.

Your serratus anterior muscles are responsible for stabilizing, protracting, and rotating the scapula as we perform various movements at the shoulder joint. For example, when throwing a punch these muscles are fully activated. In this instance, the serratus anterior helps to protract the shoulder blade pulling it forward increasing overall stability. Due to the nature of the sport, boxing athletes develop a strong set of them. Likewise, the muscle is also activated when performing any kind of pushing activities. When performing a push up, the serratus plays a major role in keeping the scapula from pulling away from the back of the ribcage.

In addition to throwing a solid right hook, the serratus allows you to raise your arms forward, away from the body and high above our head. As you raise your hands above your head these muscles contract rotating the shoulder blade upward allowing for greater range of motion. “This shifting now enables the arm to lift above 90 degrees” Without this shift proper movement will be limited leading to increased risk of injury.

Having a strong pair of serratus anterior muscles is important to the overall health of your shoulders not only for the professional boxer but also for the average Joe. While there are a handful of exercises that specifically target this accessory muscle, at Vertex Fitness we aim to provide the most efficient workout possible by utilizing exercises that target larger muscle groups while simultaneously stimulating the serratus. While performing the decline press, reverse pullover, and shoulder press the serratus anterior is actively working to stabilize the shoulder. We also utilize advanced manual resistance training techniques such as the lateral and front raise that help to strengthen the muscle as well.

2 thoughts on “Muscle and Function: The Serratus Anterior”