Vertex Fitness | Rhabdomyolysis: What is It, and Why Should You Care? - Vertex Fitness
InstagramLinkedinYouTubeGoogle+TwitterFacebook

Rhabdomyolysis: What is It, and Why Should You Care? 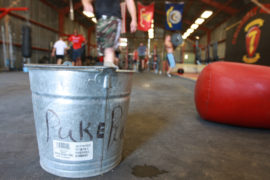 Today I want to talk about a serious health condition that anybody who works out needs to be aware of. It’s called Rhabdomyolysis, and it happens when people push their training too far, too fast.

Rhabdomyolysis is discussed at length in this book, “Rhabdo: The Scary Side Effect Of Exercise You’ve Never Heard Of”, written by my friend Joe Cannon. Joe also wrote a thorough blog post on the subject titled “Rhabdomyolysis and Personal Training Facts You Need To Know”

Essentially, Rhabdomyolysis (sometimes known as simply “rhabdo”) is muscle cell death. For one reason or another, the muscle fiber cells die, and their contents leak into the blood stream. This can happen for a number of reasons; snake bites, car crashes, complications from anorexia disorder, or side effects from weight loss drugs or cholesterol-lowering statins can all cause muscle fiber death. The form that you should watch for is known as “exertional rhabdomyolysis”, and it’s caused by over exertion.

What are the Symptoms of Rhabdomyolysis?

Most people experiencing rhabdomyolysis will experience one of two symptoms. The first is severe pain, swelling, weakness, or fatigue in the muscles. The second symptom to watch for is urine the color of iced tea or Coca Cola–the color change is due to myoglobin being excreted in the urine.

How does one tell the difference between normal muscle soreness after a workout and symptoms of rhabdomyolysis? The normal soreness and discomfort that you feel when you workout is known as DOMS—“delayed onset muscle soreness”. You will normally experience DOMS at least a day after performing the exercise—for example, when you wake up and feel stiff and sore in the muscles that you worked the previous day.

Pain that is cause by rhabdomyolysis will happen quicker, within the first 24 hours after exercise. The main thing to be aware of is that the pain from rhabdo will persist even when the muscle is not moving. If you feel a persistent pain while the muscle is at rest, you are not experiencing normal workout soreness. Normal workouts should also never cause swelling in the muscle or joints. This is a sign that something is wrong.

Rhabdomyolysis is more dangerous than simply losing muscle cells. The danger occurs when the contents of those cells leak into your blood stream. This can cause kidney failure, heart attacks, and death. Not every case of rhabdo is fatal—some exercisers, not recognizing the symptoms, don’t seek medical treatment and recover on their own. But because of the risk of serious health complications, if you do experience the symptoms of rhabdomyolysis, you should call an ambulance.

How Does it Happen?

Rhabdo can occur whenever someone pushes their workout routine too hard, too fast. There have been reported cases associated with high-intensity workout regimes, including bootcamp-style classes, CrossFit gyms, spinning classes, and the Insanity or P90X programs. Many cases are associated with someone who is a novice or unused to strenuous physical activity jumping straight into a high-intensity program without giving their body any time to adjust.

Anyone can get rhabdomyolysis. It happens to professional athletes and novices during their first gym workout. As Joe Cannon puts it, “Some people can train to be a Navy Seal and never get it. In others, performing only 30 sit ups a day for a week might cause it. Because of this, it appears that some people might be more susceptible to rhabdo from exercise than others.”

Rhabdomyolysis is not necessarily a repetitive-stress type injury—it can happen after just one workout if you push yourself too far, too fast.

What Raises Your Risk Factors?

According to the prevailing research, several factors can increase your risk of experiencing rhabdo. Rhabdomyolysis has been shown to be more likely to occur in someone who is unaccustomed to strenuous physical activity, as I’ve mentioned. Rhabdo can also be more prevalent in those taking cholesterol-lowering statin drugs. That’s why you sometimes hear “If you experience any pain or weakness, see your doctor as this could be a sign of a rare but serious disorder” on TV. This warning appears on commercials for prescription cholesterol medications, and they are referring to rhabdomyolysis.

Over the counter pain killers like aspirin or ibuprofen have also been shown to exacerbate the symptoms of rhabdo. This has to do with how these drugs affect your kidneys. That’s why it’s important not to wait it out and see if symptoms abate with painkillers if you suspect you may be experiencing rhabdomyolysis.

Regular exercise is a great step to improving your health. However, if you are working out so hard that your muscle fibers are dying, are you not being healthy or safe.

Here at Vertex Fitness, we know how to recognize the risks and signs of rhabdomyolysis. With these risks in mind, we design our workouts to be safe and effective. We start new clients by easing them in to the workout routine slowly, to give their bodies time to adjust. As you get stronger, we increase the reps slowly and weights by approximately 5% at a time. We are trained to know what your limits are, and to work within them safely.

One thought on “Rhabdomyolysis: What is It, and Why Should You Care?”