Vertex Fitness | The Rise of the Superman
InstagramLinkedinYouTubeGoogle+TwitterFacebook

The Rise of the Superman 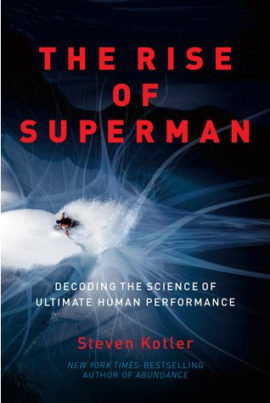 The Rise of the Superman

Have you ever been playing a sport, doing an activity, or even driving and all of a sudden you come out of an almost “blackout” type daze not knowing how the last few seconds have just played out? That my friends is Flow, but to put it more scientific terms for you; Flow is basically a state of optimal consciousness that allows you to focus on the task at hand and perform at your best. We are going to look at this phenomenon through the book “The Rise of Superman: Decoding the Science of Ultimate Human Performance” by Steven Kotler.

I want to take you back to when you were in a state of flow: whether you were in the middle of a championship game and you just made a game saving/winning play or you are driving thinking about something that causes you to day dream and all of a sudden you have driven for the past 2-3 minutes without much recollection of driving during that time. How confused were you once you got out of the state and floated back to reality? I remember a situation when I was playing Short Stop in college; there were runners on second and third with 2 outs, my team was up by 1, in the bottom of the last inning. If we hold them here we win! The batter ripped a line drive in the hole to my right……..and that’s the last thing I remember. All of a sudden I wake up, lying on the ground with the wind knocked out of me and my teammates running over to pick me up. I had somehow reacted, turned and dove to the hole to catch the ball without ever knowing it. Wow was I glad Flow decided to kick in at that time! Now I know this is just one example of one kind of flow, but this event in one way or another, has happened to all of us. And this is what ultimately sparked my interested to take a closed look at what Flow really is and its impact on us. Then through my research I stumbled upon a book written by Steve Kotler.  Again, the book is titled “The Rise of the Superman” and it focus’s on how being in a flow state leads to peak human performance and even further defines flow as “…every decision, every action, leads perfectly, seamlessly, fluidly to the next”. It explains how these people are using flow to do the impossible and how we can use this information to radically accelerate performance in our own lives. This was one of those books where its almost impossible to put it down, and you will be entertained throughout with the numerous stories of extreme flow and amazing depictions of man’s will to overcome his own mental barriers. I urge everyone who is reading this Blog to read this book, it will not disappoint.

The entire book is memorial to all those that have shown what the human spirit can accomplish; when we put aside all preconceived notions, fears, obstacles to challenge ourselves and push beyond what was previously thought to be our limits and enter FLOW!

The Rise of Superman:
Decoding the Science of Ultimate Human Performance
by Steven Kotler